SATORI – And the martial arts teacher 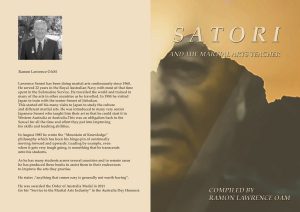 Lawrence Sensei has been doing Martial Arts continuously since 1960.
He served 22 years in the Royal australian Navy with most of that time spent in the Submarine Service. He travelled the world and trained in many of the arts in other countries as he travelled.
In 1985 he visited Japan to train with the senior Sensei of Jishukan.
This started off his many visits to Japan to study the culture and different martial arts. He was introduced to many very senior Japanese Sensei who taught him their art so that he could start it in Western Australia or Australia. This was an obligation back to the Sensei for all the time and effort they put into improving his skills and teaching abilities.

In August 1985 he wrote the “Mountain of Knowledge” philosophy which has been his hinge pin of continually moving onwards and upwards. Leading by Example, even when it gets very tough going, is something that he transcends onto his students.

As he has many students across several countries and in remote areas he has produced these books to assist them in their endeavours to improve the arts they practise.

He states, “anything that comes easy is generally not worth having”.

He was awarded the Order of Australia Medal in 2011 for his “Service to the Martial Arts Industry” in the Australia Day Honours.