Hanshi Malcolm Lomax was promoted to 9th Dan Hanshi in June 2005 by the Australasian Sokeship Council (ASC) under the Chairmanship of Grandmaster Barry Bradshaw.
He was appointed an Inaugural member of the Australasian Sokeship Council (ASC) on it’s formation in 1997.
In 1998 he was appointed the Vice President of AMAHOF and remained in that position until his retirement from the position in 1999. He continued as a Board Director until 2008.
He attended most AMAHOF Awards events and assisted in Grading panels whenever asked by the ASC.
He will remain in our memories forever as such. 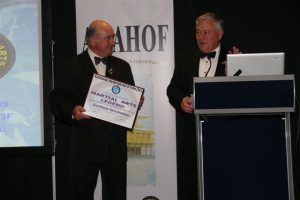 Grandmaster Barry Bradshaw was promoted to 10th Dan in November 1997 and became the first Chairman of the Inaugural Australasian Sokeship Council (ASC) on it’s formation the same year. He remained the Chairman until his resignation in February 2010.
In 2000 he was appointed the Vice President of AMAHOF and remained in that position until his retirement in February 2010.
Grandmaster Bradshaw only missed attending the AMAHOF Awards once in the whole time it existed and that was due to a family illness that prevented him joining us at the last moment. Such loyal dedication to service and duty is a demonstration to us all in what is expected of a martial artist to become such a senior and well respected member of the Australasian Martial Arts Industry.

He will remain in our memories forever as such.
View Barry Bradshaw’s AMAHOF page.

During his time involved in martial arts he practised many styles -Tien Sien Pai; Whanake Rangataua; Syukukan; Kyokushinkai; Kysyukan; and Shotokan karate. He attended many seminars around the world and spent much time training in Japan. At the time of his Induction into AMAHOF he held Karate 5th Dan and Judo 1st Dan qualifications.

Shihan Makeikura represented New Zealand in a number of international competitions over his martial arts career. Unfortunately he lost his battle with cancer on 1st June 2009 and will be missed by all of his friends in the martial arts community.

His achievements and commitment to the development of martial arts during his distinguished career is a great loss indeed. Our condolences go to his family.
View Shihan Makeikura’s AMAHOF page.