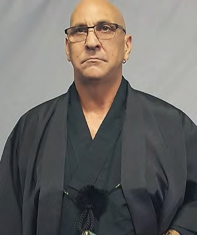 I began my martial arts journey at the age of 7, at the Burdekin Ju-Jitsu Club in AYR, North Queensland under the instruction of Sensei Ted Young. Yon Dan (4th Dan) in 1969 and progressed to 3rd Kyu Green belt by the age of 17.

I left AYR in 1979 and moved to Roma due to my father’s transfer working as a police officer. I completed school in 1979 and gained employment as an assistant baker, this closed after 12months due to being taken over by a competing business. The next day, I found employment at Mitre 10 in Roma.

On 2nd January 1982, I was appointed to the position of Ambulance Officer Q.A.T.B. Roma. During my time there, I continued my Martial Arts studies at the Roma Judo Club. I also lectured and taught First Aid classes.

Whilst being the swimming coach for Wallumbilla Swimming Club. I transferred to Gatton, Q.A.T.B as of 5th January 1984 as an ambulance officer and I opened a youth centre in Gatton. This is where we taught Martial Arts as there were no resources available for the youth in the community. I taught Ju-Jitsu and my colleague taught Judo.

On the 21st February 1986 I transferred to Q.A.T.B Caboolture where I continued as an Ambulance Officer. At this time, I was approached to assist in the formation of a community youth association. We formed the Caboolture and District Youth Club. This was a not-forprofit organisation, and all funds were raised in hope to open a P.C.Y.C for the district of Caboolture. We achieved this goal on 28th October 1989.

From 1986 I had attended many seminars conducted by Soke Jan De Jong and decided to follow his teachings and grading system exclusively. On 15th June 1993 I re-sat my Shodan grading under his system and continued to train and grade under Soke Jan De Jong up until his death in 2003.

I then attained the rank of Yon Dan (4th Dan) at Tsutsumi Hozan Ryu Ju-Jitsu. I was regularly training in many styles of Martial Arts. This included Ju-Jitsu,Karate, Hokushinshinto Ryu Iaido, Aikido, Kyudo, Kali, Ken Jujitsu and Jeet Kune Do.

I continued to conduct all marital art seminars from 1987-1994. At this time, it was hard to obtain marital arts instructors to teach outside of their usual style. I promoted these seminars as free, as the real reward was the knowledge gained. Instructors taught their sessions for free then were given the opportunity to become a student for the remainder of the seminar.

These seminars quickly grew in popularity and reputation, encompassing 40 different styles of Martial Arts over a full weekend when cross training was frowned upon. These were the only seminars to my knowledge of this type that were available during this time. I believe the knowledge gained was essential to bridging the divide between different marital arts styles.

I maintained strong ties with many martial arts styles and was asked to teach many Ju-Jitsu seminars around the country. Sports Karate Australia has appointed me as the national consultant of Ju-Jitsu/Kobudo/Self Defence and national Register of grades since 1990, I still hold this title in 2022.

I currently sit on the S.K.A Black Belt Panel and teach seminars for S.K.A.

In 2003, after the death of my teacher and mentor, Jan De Jong Soke O.A.M. I rewrote my curriculum and founded the Ju-Jitsu style of Go Rin Pou which included other elements and had evolved but maintained strong basics from Tsutsumi Hozan Ryu.

In 2019, I was appointed National President and Australian representative for WJJKO, whilst simultaneously being appointed as the World Vice President for WJJF-WJJKO and appointed to the board of Directors WJJF-WJJKO. This was the position Jan De Jong held since 1976 and I was honoured to be continuing his legacy.

I was inducted into WJJF/WJJKO “Shihan Kai” Elite Council of Masters 24th April 2017. Then, on 27th April 2019, while attending the A.G.M and teaching at the WJJF-WJJKO World Congress in Italy, I was awarded the rank of Hachi Dan (8th Dan) and the title of “Hanshi”.

The same year, I was appointed the Australian Representative and National President of the World Budo and Kobudo Federation. I enjoy the privilege of teaching nationally and internationally on behalf of two world organisations.

I am currently employed by Queensland Ambulance Service with 40 years’ service, during this time I have held the positions of Paramedic, Officer in Charge and Training Officer.

In conclusion, my passion has been the study of martial arts over the past 53 years, 38 of which were teaching. My life mission has been to pass on the legacy of ancestors, through the knowledge of my sensei and myself without dilution to the generations of the future.

Allowing the evolution of Martial Arts beyond what we have, due to the sound foundation taught today