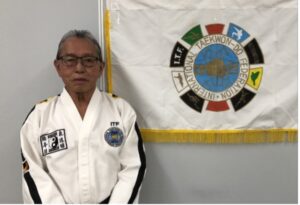 Grand Master Wong’s interest in learning Taekwon-Do began with a desire to learn Self Defence and develop physical fitness. He soon realise that Taekwon-Do is much more than what he expected. It’s a way of life and soon the Spirit and Philosophy of General Choi’s Taekwon-Do became a passion and a part of his life.

In 1973 he was Graded to I Degree Black Belt by Masters Rhee Chong Hup and Rhee Chong Chul. In 1974 he commenced teaching Taekwon-Do in Melbourne under Rhee International TKD.

In 1977 he was graded by Masters Rhee Chong Hup and Rhee Chong Chul to II Degree Black Belt and began running his Taekwon-Do Club in Melbourne. With the desire to raise his technical knowledge and proficiency in Taekwon-Do, he continued to train and promote Taekwon-Do under the Rhee Brothers within Rhee International Taekwon-do Australia.

In 1983, he was graded to III Degree Black Belt by Master Yun Young Ku and attended many

In 1985, he represented Australia at the South Pacific ITF Taekwon-Do Tournament in Wellington, NZ. 1988 he was graded to IV Degree Black Belt Belt by Master Yun Young Ku and becane an International Instructor conducting seminars in Australia.

Grand Master Wong has devoted over 51 years in his life Training, Practicing and Promoting the True Spirit and Philosophy of Martial Arts especially the Tenets of Taekwon-Do – COURTESY, INTEGRITY, PERSEVERENCE, SELF CONTROL AND INDOMITABLE SPIRIT.