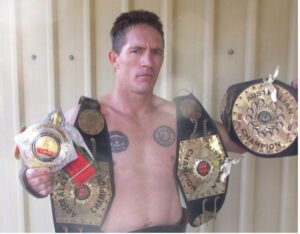 (Posthumously) Inducted into the A.M.A.H.O.F. (Inc) for 2022
Continual Excellence and Service to the Australasian Martial Arts Community

Alan Pond was a true champion-a unique character, friend, fighter, trainer, contributor to combat sports and the martial arts community. His many achievements and immense contributions toISKA speak volumes of the exceptional person he was.

Alan was nothing short of an Icon in Australian combat sports and a true character who will be greatly missed and never forgotten.

In 2010 he was appointed by Rob Murdoch to be the ISKA regional representative for West Australia and worked tirelessly to have ISKA accepted by the commission for all combat rules. Alan was the first representative to be appointed in WA and have the combat sport community accept a new body. He was relentless in lifting the profile of the entire sport.

There will be a void in the combat sport world as a result of his passing but Alan Pond’s input into the sport will be there forever.