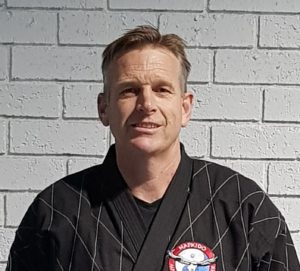 Travis has been fortunate to be surrounded by outstanding martial arts role models and mentors throughout his life. These individuals have shared many hours with him. Through their exemplary example they have created in him a lifelong passion for martial arts. They include John McIntosh, Terry Walsh, John Haitidis, Alfonso Jimenez, John Whipp, Ray Floro, John Will and Danny Weir.

He commenced his martial arts journey while attending a Boarding school in rural Victoria in the summer of 1982 under Sensei John McIntosh (4th Degree) who recently celebrated 50 years of training. He was also fortunate to study Judo under Mr Terry Walsh and the Cadet unit has an Unarmed Combat Cell which he eventually ran in year’s 11 and 12. This Karate journey continued for a number of decades and he eventually reached 3rd Degree in World Shotokan Karate.

Travis graduated from the Royal Military College, Duntroon and met MAJ John Whipp and trained in the Military Unarmed Combat System and eventually achieved ‘B ‘ Class Instructor qualification and ran many Unarmed, Close Quarter Fighting and Military Self Defence course for the ADF across Australia over a 20 year period. He also did two deployments both with Commando’s East Timor and in Afghanistan.

In 2000 He commenced studying Hapkido under Master Geoff Booth and reached 2nd degree under him and 4th Degree under Master Fari Salievski. He opened a Hapkido School in Canberra in 2003.

In 2003 he meet Guro Ray Floro and has been a Floro Fighting System instructor under him for a number of years..

In 2004 he was exposed to Brazilian Jiujitsu (BJJ) under Prof John Will. His school commenced teaching BJJ in 2007. The school offers Hapkido and BJJ classes most days of the week. Prof Will is one of Australia’s first BJJ Black Belts and his influence has been profound.

The journey is not even half over, and he looks forward to the next decades of training with amazing instructors and students.