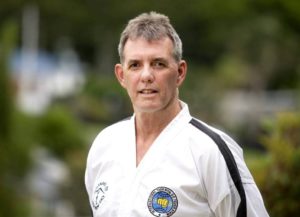 Neill Livingstone has been the respected instructor of his Taranaki Taekwon-Do club for more than 25 years.

Originally from Northern Ireland, he came to New Zealand in 1982 and started training in Taekwon-Do under Master Rimmer in Tauranga in 1987.  He gained his first black belt in 1991, moved to New Plymouth and started the Taranaki Taekwon-Do club in 1993.  He’d trained as an engineer, but chose to work with NZ Post to have time for his young daughter and for the club.

He has organised many seminars in New Zealand with invited international Masters, and has taken groups from New Zealand to several seminars in Australia with Masters from Australia and America, and to a Tul Tour in South Korea in 2015.   Another of these Tul Tours is planned for 2019.

His students, aged from 5 to 75 years, appreciate his loyalty and commitment to them so much that they nominated him for the Queen’s Service Medal, which he received in 2019 in the New Year Honours list for services to Taekwon-Do and to the community.

At the time of writing he is a 6th Dan; he is planning to grade for Masters in 2019; but his major aim, as always, is to take each of his students as far as they can go in the practice, the skills, the knowledge and the science of Taekwon-Do.

He is proud to be known as totally dedicated to the art, to the club and to the students.