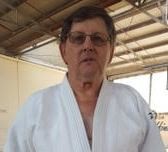 Inducted into the A.M.A.H.O.F. Inc for 2019
Lifetime achievement – Judo

Inducted into the W.K.U.H.O.F. for 2019
Lifetime achievement – Judo

I Started judo at the Adelaide University Judo Club in 1971. The club was coached at the time by a Brown Belt by the name of Cliff Adams. The club was small, but Cliff taught me the basics and I progressed to Green Belt under his coaching.

Cliff finished his PhD and then left to pursue his career. This created an exodus of all players above Green belt, so I was left with the decision to stay with the club or walk. A few members convinced me to stay. Cliff took me to Adelaide YMCA Judo Club before he left the State and I progressed to Shodan through Hans and Marie Hol, the coaches at that venue.

Reading Kodokan Judo was a revelation, and I took to the teachings of Jigoro Kano Shihan immediately. I dedicated my coaching to fulfilling the principles of Judo Mutual Benefit and Maximum Efficiency as espoused by Kano Shihan.

Johnny Whipp, Third Dan at the time came to SA and assisted me at the Adelaide University Judo Club until his posting was finally completed. Johnny confirmed my approach with his own saying:

“Bettermen of the mind, Betterment of the Body and Fellowship”

I have spent over 45 Years, developing Judo both at Club and State level to progress Kodokan Judo as I see it.

This includes not only Judo for sport, but also Judo the Martial Art as refined and defined by the Katas of Judo and through this make the lives of all that practice judo better for it.