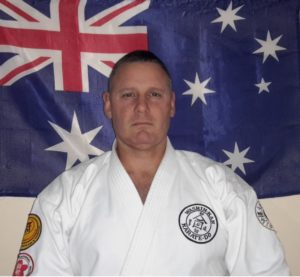 Inducted into the W.K.U.H.O.F. for 2019
Lifetime Achievement – Okinawan Shorin Ryu

Darren Lea has been a student of Karate Do since age of 6. In 1977 he joined Goshin Ryu karate at Mt Druitt high school and trained with various instructors including, Hanshi Richard Bradford, Kyoshi  Warren Hickey, Geoff Spice, Carol and Corine leGall, Kevin Campbell. He later went on to teach Goshin Ryu at Lethbridge Park dojo some 12 years later.

Darren left Goshin Ryu in 1991 and joined Kokoro Kai Karate Do Association under the teachings of Shihan Alexander McCall and Dugald McCall there he graded to 5th Dan in Karate in 2005.

Darren opened Washin Kan Karate Do Association in 1995 and has continued this school to present day. He trained in Japan from 1991 to present in Seishinryu under the direction of Soke Katsumi Okubo . He also trained with Kaiso Toshihiro Obata under Shihan Dr Butch Tamises in Philippines and Nobutaka Sensei in Sapporo Japan and is currently an instructor for this association.

Darren had been training in Philippines in 2009 where he met his wife Ruby while attending a Sikaran Arnis class in Marikina. Darren then was graded to Master in these styles.

Over the past 20 years Darren has undertaken a few community projects while being a Master Mason for the Auburn lodge 180 and has also developed a youth programme (Little Panda’s) to help educate and instruct local youth in traditional martial arts and its values as well as practical self-defence aiming to assist in eradicating bullying which is a major problem in modern society.

Darren has also mentored many students through their personal difficulties and nurtured their martial art and life skills that they needed to develop to ensure good character and moral standing within the community.

Darren enjoys developing his teaching skills and looks forward to the many challenges that martial arts have to offer.  Darren enjoys music (especially karaoke), fishing, Old Muscle cars and most of all spending quality time with the love his life Ruby who continues to motivate and support Darren’s passion and commitment for martial arts.