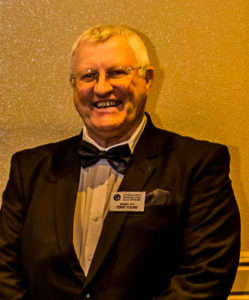 Inducted into the W.K.U.H.O.F. for 2018
Lifetime achievement – Judo

Over the last 60 years, Terry Young has excelled in the martial art of Judo at local, state, national and international level in the roles of athlete, coach, manager, referee, Dan grade examiner, and association administrator.

He was a member of the Strategic Planning Committee for Judo at the 2000 Olympics, served as a committee member for the NSW Olympic Council and was awarded Life Membership of Judo NSW in 2005.

Terry has been an IJF (International Judo Federation) Roku-Dan (6th Dan) black belt since 1997 and is the proud founder and head coach of the judo club, Tiger-Do Martial Arts that he created in 1988. Terry has produced over 30 black belts, upwards of 40 national champions and 30 internationals, including Olympians.

Terry has ALSO coached at a NSW state level for 20 years. He was also an official team training partner to the Judo Team at the 2004 Olympic Games in Athens.

He has received significant volunteer awards for his contribution to judo, including the Member of the Order of Liverpool (1997), Liverpool City Council Volunteer of the Year (2005) and the Hughes Electorate Award for Service to Community, including Sport (2007).

He has spent several years coaching in schools (public and private). He is still organizing school holiday clinics, community self-defence seminars for females.

He has taught members of the Australian Defence Force, NSW Sherrif’s Department, and the NSW Police.

When not doing Judo, Terry’s hobbies include: family, reading and the beach.