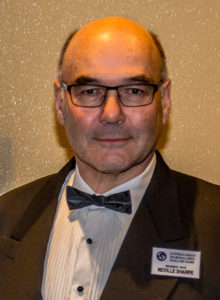 Inducted into the W.K.U.H.O.F. for 2018
Lifetime achievement – Judo

Neville Sharpe Godan is a highly successful educator at the same time being an elite Judo competitor, coach, referee, educator and leader of judo in Australia.

Neville started Judo at the age of 15 in 1969. He also studied Japanese Ju Jitsu alongside judo