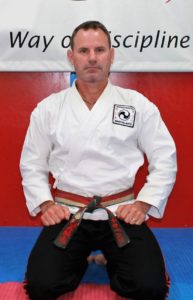 Inducted into the W.K.U.H.O.F. for 2018
Martial artist of the year – Mixed Martial Arts

Kyoshi Matt began his training in Martial Arts in 1983.  A former Victorian Full Contact Karate & Kickboxing champion, he has dedicated the past 35 years to the study of Martial Arts.  He has trained intensively in disciplines such as Kwannon Karate, Zen Do Kai, Kickboxing, Boxing, Kung Fu, Muay Thai and Ju Jitsu to enable him to develop his own practical and comprehensive Martial Art.

In 1995 he formed Hoshiki Kiritsu Martial Arts. Kyoshi has taught over 1,500 students Martial Arts, Self Defence and Kickboxing.  Over the past 25 years he has developed Self Defence Courses specifically for women, school groups, intellectually disabled groups and other vulnerable groups. He has taken more than 100 of his martial arts students from beginner to Black Belt and beyond.

Kyoshi Matt met his wife Maree (4th Dan) through martial arts and they have two teenage daughters who have also achieved their Junior Black Belts.  They have their own Honbu in Ringwood North, with over 100 students. More than 30% of students have family memberships.

Kyoshi Matt has followed his passion for martial arts, training around the world training and learning in places such as Shaolin Temple in China; Japan; Hong Kong; England and Thailand.  Positive experiences with other styles such as Mindful Wing Chun and Greatest Thai Boxing in Hong Kong and Grabaka MMA and Burn MMA in Tokyo have led to annual overseas trips for the last 7 years

He has also taken his passion for training and helping others into the classroom.  In 2011 Kyoshi completed his Diploma in Sports Coaching – specialising in Martial Arts, enabling him to further develop Hoshiki Kiritsu and his instructors.  Recently he recognized a need in the community for men’s counseling and felt his experiences in martial arts and as a Sensei may benefit others, particularly men seeking counseling.  He completed his Diploma of Counseling in 2016 and now works with Redefine Life as both a general and men’s counsellor.  He is also a qualified Personal Trainer & Fitness Trainer and has a Certificate 4 in Training and Assessment.

Over the last 23 years Kyoshi Matt has over 40 articles published in both Blitz Martial Arts and Blitz Martial Arts Business Magazines. For Kyoshi Matt martial arts is not just about training, it is a way of life that has embodied him and guided him through life from the age of 12 and he now takes great pleasure sharing this way of life with his students and instructors.