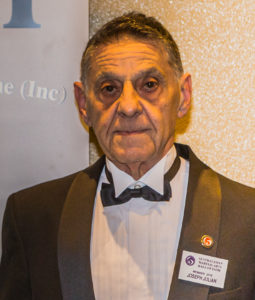 Inducted into the W.K.U.H.O.F. for 2018
Lifetime achievement – Karate

In 1960 at the age of 20, after moving from Queensland to Sydney then Melbourne, Joseph began martial arts training with Yoshin Ryu. In Melbourne he trained at the local YMCA, in Northcote with Willow Heart Yoshin Ryu, in Heidelberg and in Preston at the Yoshin Centre. This was followed by two years training in Wado Kai with Kancho Tino Ceberano.

From 1970 to 1977 he travelled around Australia with Shihan John Watkins as his assistant doing seminars and running training camps. Joseph also did seminars with some of the legends of martial arts including Chuck Norris, Bill Wallace and George Dillman. Later on he trained with Shihan David Harcourt in judo, jujitsu and karate.

Joseph is still training at Yoshin Ryu in Preston with Shihan Alex Kastamonitis and is currently a Senior Instructor. A member of the World Kumite Organization he has assisted in events and seminars for Tae Kyon Karate with Shihan John Hoffman 9th Dan. He has assisted instructing at seminars with Kyoshi Bruce Haynes and MKK Camps with Shihan George Kolovos.