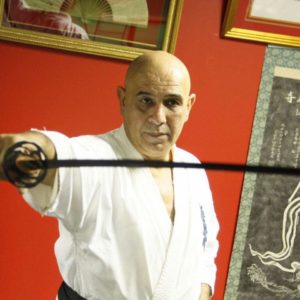 Inducted into the A.M.A.H.O.F.(Inc) for 2018
Lifetime achievement –  Kyokushin Karate

Inducted into the W.K.U.H.O.F. for 2018
Lifetime achievement –  Kyokushin Karate

George has over 40 years of successful karate experience, holding a 6 Dan in Kyokushin Karate.

George has fought in many Kyokushin karate tournaments and kickboxing shows, he regularly appeared on the Channel 9 Don Lane Show and fought under the legendary Bob Jones.

George is known to be one of the leading instructors in the world, producing world champion fighters such as Shihan Maria Gibilisco, Sam Greco and Judd Reid.

In 2007 Shihan Kolovos with Shihan McGuinness created the WKO, World Kumite Organization and in just over 10 years runs full contact tournament in Japan and every 4 years in Thailand.

WKO is now the biggest karate organization in Japan, staging over 200 tournaments a year

In 2014 George and other leading Victorian promoters of combat sport created what is now the only Amateur Association in Victoria called VAMMA responsible for developing the sport from the junior level.

George brought Muay Thai into Melbourne by running fight night promotion called Brute Force and was the second promoter to legally stage a MMA show in Victoria. Fighters from Europe, China, Thailand and Japan have all competed in his shows.

And now runs one the most successful and biggest martial arts centres in the world.