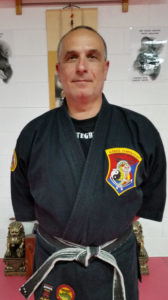 I began my Martial Arts journey in 1979 at the age of 12 with the Adelaide Combined Martial Arts Club. At the time Kyojukai Karate and Ju jitsu were taught. By the age of 16 I had been graded to Black Belt and attained Sempai title at 18.

In December of 1994 Foreman Ju Jitsu (which was established in 1896) was formally aligned with the Adelaide Combined Martial Arts Club.

I continued with the Adelaide Combined Martial Arts Club until 1999 when work and study commitments took priority. However I still taught privately and conducted women’s self defense courses.

I am senior instructor at CMAA with the title of Renshi (attained in December 2013).

I am a proud supporter of Canteen and Fighters Against Child Abuse Australia. My love of cooking keeps me busy during my spare time. Unfortunately I don’t have the same skill level.