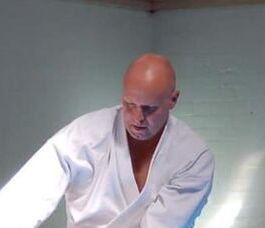 Returned to Australia in April 2000, and disillusioned with the training and teaching in Australia, moved to Tasmania in 2002 to study Aikido in a more independent environment.

Opened my own dojo at the request of Maruyama Sensei in 2004 becoming the head instructor for Tasmania.

Traveled and acted as Maruyama Sensei’s main Uke at seminars from 2002 until present.

In 2014, at the personal request of Maruyama sensei took over the role of Chief instructor of Yuishinkai Australia.

In 2015 named the Senior international instructor for Aikido Yuishinkai International and in 2017 awarded the rank of 8th dan in Yuishinkai Aikido and given the title “Dai Shihan” by Maruyama Sensei.

Peter has Dan grades in 3 separate styles of Aikido, as well as kyu grades in two other styles.

Peter is privileged to travel and teach Aikido and has taught both in Japan Australasia and Europe as Sensei Maruyama’s direct representative.