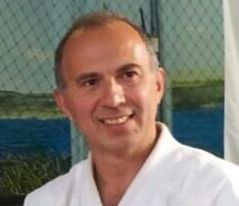 Inducted into the A.M.A.H.O.F.(Inc) for 2017
Martial Artist of the Year – United Taekwondo

Inducted into the W.K.U.H.O.F. for 2017
Martial Artist of the Year – United Taekwondo

I have been involved in Taekwondo for over 30 years.  I started training in Taekwondo in Concord West in 1984 under Rhee Taekwondo. A good friend of mine convinced me to take it up as a good form of exercise and basically I got hooked.  I trained for approximately 5 years at that branch until I married and moved into the St George area of Sydney.

I re-joined Rhee Taekwondo in 1997 after I met Master Paul Mitchell and started training at the Penshurst Dojang.  I then moved over to the Oatley Dojang and achieved my 1st Dan Black Belt in early 1999.  Not long after that I was promoted to branch instructor and have been teaching at the Oatley Dojang ever since.

When I started in taekwondo with Master Paul Mitchell, I was primarily looking to get my son into an activity.  I am proud to say that two of my children have achieved their black belts in Taekwondo and the youngest is only one grade away from hers.

I have supported the local community by conducted taekwondo demonstrations for fetes at all the local schools in Oatley and surrounding areas on an annual basis for almost 20 years.

As the Chief Instructor for the St George / Sutherland Regions for United Taekwondo, I am responsible for 8 dojangs and approximately 300 students in the area.

In 2016, my experience was acknowledged and I was given Grading Assessor responsibilities by Master Paul.

As a result of our growth and hard work, the St George region won the 2014 St George Local Business Awards for Outstanding Fitness Services.

My other passion is golf. However, despite playing golf for as many years as I have been doing taekwondo, I have not been able to master the game.