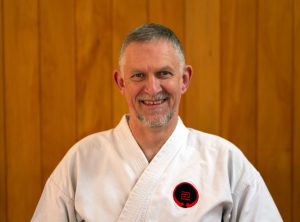 Inducted into the A.M.A.H.O.F.(Inc) for 2017
Lifetime Achievement – Goju Ryu Karate

Inducted into the W.K.U.H.O.F. for 2017
Lifetime Achievement – Goju Ryu Karate

I was born 1956 in Romford England and became a paraplegic in 1967 after trying to climb a cliff, which gave way on me. I broke my back at T5, I have stomach muscles, legs and no balance.

I had always been interested in unarmed combat through my Father and Uncles and got interested in Martial Arts through Bruce Lee movies and the Kung Fu TV series.  At an early age I was keen to learn how to look after myself but no one would teach me a martial art because I was in a wheelchair so decided to teach myself with the help of family and friends through books.

I was eager to learn  martial arts so continued to practice what I could with a friend practicing moves etc. from books, until in 1975/76 I found a karate club that was not put off by my wheelchair and I have been training in martial arts ever since.

I have experienced many things in my life and one of the most memorable events was the first time I trained with Sensei Higaonna.

It was with great humility that Sensei Higaonna presented his belt to me, saying that it “was not a grading but an acknowledgement of his respect for my training and spirit”.  He told me to ‘put the belt on my wall and to use it to inspire me to continue’”.  I still have his belt which is a much prized possession

In 1980 Sensei Higaonna graded me to Shodan and told me that I could now “wear his belt”.  I had trouble controlling my emotions.

In 2016 I attended the 7th Budosai in Naha Okinawa and was asked to do a demonstration of wheelchair self defence.  At the Budosai I was graded to Rokudan by Higaonna Sensei.

I strongly believe that it is my martial art training that has helped me maintained a strong body and mind despite spending over 49 years as a paraplegic.  It is also very humbling to be recognized by your peers when you are doing something you are passionate about.