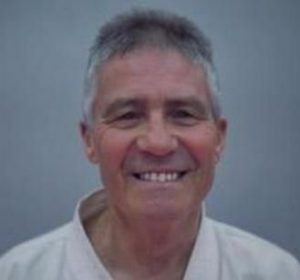 Inducted into the A.M.A.H.O.F.(Inc) for 2017
Lifetime Achievement – Kyokushin Karate

Inducted into the W.K.U.H.O.F. for 2017
Lifetime Achievement – Kyokushin Karate

In 1974  Alex opened his own dojo in Tirahi Bay and was graded to Ni Dan in 1978, San Dan in 1988 and to Yon Dan in 1991. He has acted as assistant instructor to NZ Branch Chief Sensei Jack Gibbons and competed internationally in Kyokushin tournaments.

He also coached the NZ Team at the 1984 world tournament in Tokyo. In 2008 he graded to Go Dan and continues to train and teach at Poneke Dojo in Wellington NZ as part of the Matsui IKO International Kyokushinkai Organisation.

For many years he has worked as a volunteer fundraiser for the program known as ‘ The young New Zealanders Foundation”. This non Government funded program helps teenage & young people develop self esteem.

For 50 years he has instructed young children in the Martial Art of Kyokushin Karate in a volunteer capacity and for ten years acted as a volunteer counsellor at Wellingtons Men’s prison.

He successfully completed a ‘Diploma in Recreation & Sport’ to help further his understanding of the specific requirements of the Karate athlete as it relates to optimum performance.