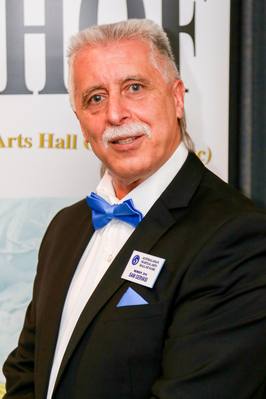 Inducted into the A.M.A.H.O.F.(Inc) for 2016
Lifetime Achievement – Martial Arts & Healing

Inducted into the W.K.U.H.O.F. for 2016
Lifetime Achievement – Martial Arts & Healing

Soke Gervasi was born on the 10th December 1954 in Sicily, and migrated to Australia in 1963 when he was 9 years old.

Soke Gervasi’s first martial arts experience was in boxing, at Essendon Technical School in Melbourne. His coach was Harry ‘Snowy’ Dorren, the 1946 Victorian Boxing Champion. On leaving school Soke Gervasi pursued a career in motor mechanics, which forced him to leave the art of boxing and search for something offering similar ingredients.

Soke Gervasi soon found a dojo in Newport, Melbourne which was run by Shihan Wayne Brabham, instructing in the art of Ju-Jitsu, and in 1973 he signed up with the humble goal of achieving his yellow belt! With will and determination he steadily worked his way through the colour belts to achieve his black belt on 20th August 1978. By the time Shihan Brabham had retired from martial arts he had graded Soke Gervasi to 4th Dan in July 1989.

Soke Gervasi took the initiative to open his own dojo on the 12th October 1982 called ‘Ju-Jitsu Ascot Vale’, a natural progression of the Western Combat Academy (Shihan Brabham’s Academy).

On the 13th January 1986, Soke Gervasi founded the Victorian Ju-Jitsu Association. On the 5th September 1989 His Dojo opened in Preston, Melbourne. On the 4tn February 1991 his dojo was opened In Geelong, Melbourne.

During the years of hard physical training, Soke Gervasi realised that in order for the body to perform at its peak it needs balance and restoration after a hard training session. This lead Soke Gervasi on a journey into the healing arts, and understanding the methods of healing and repairing the body. After travelling to many countries, training and teaching he absorbed valuable information from many masters who knew the traditional Eastern medicine and alongside his own studies with a Diploma of Health, Shiatsu and Massage, incorporated it into his own teaching agenda. This was also the time when Soke Gervasi started to develop his own natural healing products range. Thus, The International College of Martial Arts and Natural Therapies, was founded on the 28th May 1992, with Soke being the Founder and principal.

Soke Gervasi’s thirst for knowledge led him to the privileged position of coming under the guidance of two of the most renowned ju-jitsu masters in the world: Professor Wally Jay (10th Degree Small Circle Ju-Jitsu) and Professor Don Jacob (9th Degree Purple Dragon Ju-Jitsu). After training many years with both of these masters both overseas and bringing them to Australia, on the 18th March 1996 Soke was graded to 6th Dan by both of the professors. In the same year, Soke Gervasi was awarded the prestigious accolade of ‘1996 Ju-Jitsu Instructor of the Year’, at the Blitz Hall of Fame Martial Arts Awards.

In 1996 Soke Gervasi established a volunteer program called ‘Operation M.A.C.H,'(Martial Arts Community Help). This is a program designed to help those less fortunate, by doing general domestic duties for those in need (eg. Lawn mowing, cleaning, repairs around the home).

Soke Gervasi is a published author of “The Complete Guide to Safety and Awareness’, and has also published several martial arts magazines. He has also been featured on many magazines covers such as Blitz and Impact.

On October 27th 2000, Soke Gervasi founded and hosted the first ever World Martial Arts Games in Melbourne. This was a world event with numerous countries involved such as Canada, America, Trinidad and Turkey.

Soke Gervasi has been operating his own full time dojo for the past 25 years and he currently operates his martial arts and healing clinic from Airport West, Melbourne, Victoria. This is also where Soke Gervasi’s radio station Warriors and Healers ‘Radio WH’ operates from. Radio WH is an internet radio station that broadcasts information regarding Martial Arts, Health & Fitness. There are many interviews from some of the best practitioners in the fields.

Australian/International Ju-Jitsu Karate Dojos has been recognised as a unique system by many masters from around the world. As the title indicates ‘Soke’ means Head of Style, thus the chase for grades became irrelevant as there is no other style or system that can compare to his unique combination of the Martial Arts Warrior & the Elite Healer.