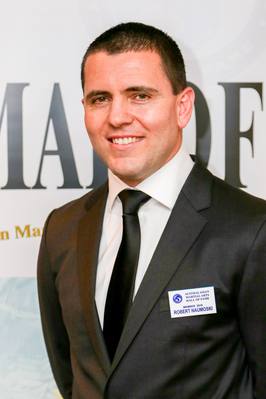 Inducted into the W.K.U.H.O.F. for 2016
Budoka of the Year – Brazilian Jiu Jitsu

After a life-long love of martial arts Including Boxing, Kick Boxing. Wrestling and black belts in Ninjitsu and Pankration, Robert Naumoski wasn’t necessarily looking for further training. His first exposure to Brazilian Jiu Jitsu was pure coincidence when the owner at his local gym invited him to train some grappling downstairs in the basement.

So the story began. Two and half years of BJJ training later, Rob saw an article in Blitz magazine about Prof. Paulo Guimaraes that caught his eye. Once he met Paulo, Australia’s first BJJ black belt living and training in the land down under, he knew he had found his instructor for Jiu Jitsu.

In 2010, Robert received his black belt from Prof. Pauio Guimaraes and Mestre Jorge Pereira, making him the first BJJ black belt of Macedonian heritage in history. Following this, Rob headed to Europe to launch Roots  Macedonia: the first of the Roots family on the continent. In 2013, Rob’s seminars in the country extended to elite law enforcement units and military special forces.