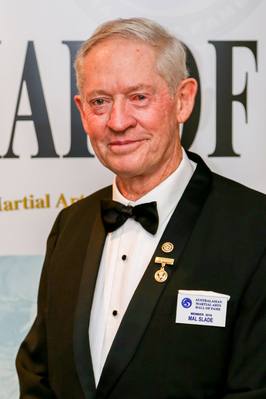 Inducted into the W.K.U.H.O.F. for 2016
Lifetime Achievement – Judo

Mal commenced his martial Arts journey in 1955 at Stenning’s Gymnasium in Melbourne.

In 1967 in conjunction with his wife, Lynnette, he formed the Southern Judo in Brighton but moved several years later to Cheltenham and a final move to the Bentleigh – Mc Kinnon Judo club. While he was at Southern Judo club he taught Judo to more than 10,000 students and assisted in excess of 40 members to reach their goal of Shodan and above.

Mal is owner and Director of Aussie Soft a software development and computer systems support enterprise. His business is responsible for the creation of Educational software such as – Timetable Genius, Crossword Genius, Starting Sounds etc as well as the creation and support of Database products in English and Japanese.

As well as a successful Martial Arts career Mal is also an accomplished Pennant B grade Squash player and a keen Golfer and is a referee at club and State levels.

He is a highly respected member of the Judo fraternity and currently holds the rank of Nanadan ( 2006).