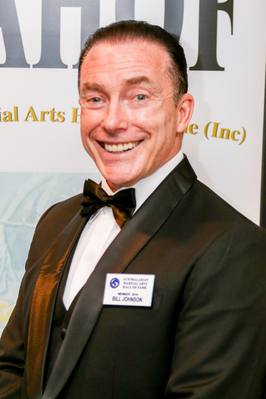 Inducted into the A.M.A.H.O.F.(Inc) for 2016
Martial Artist of the Year – Close Combat Systems

Inducted into the W.K.U.H.O.F. for 2016
Martial Artist of the Year – Close Combat Systems

My Martial Arts Journey began with my Grandfather and Father, in Ju Jitsu and
Boxing.

I started Judo in 1961 at a local club in Wyong, NSW and became the youngest Junior and Senior club champion. Grading with them to Brown Belt Level, then the Karate phase hit Australia. I trained with various organisations to improve my striking skills.
In 1986 I became the Director for the Central Coast Leagues Club Fitness Centre in
Gosford NSW and I incorporated a Boxing and Martial Arts Club within this facility.
In 1993 I relocated to Maitland NSW and Opened Body & Soul Health Works a
Gymnasium and Martial Arts Centre with Boxing, Ninjitsu and one of the earliest BJ J
clubs in NSW.

During that time we have won many Business of the Year awards and
worked heavily within our local community via fundraising for local charities and
developing self defence programs for the local women’s refuge. We take great pride
in developing the youth of the area, into becoming the best men and women that they
can be with skills of respect and humility.

Over the following years I had the opportunity to train and teach around the world
especially with my Close Quarters Combat mentor Mr. Bill Wolfe. He was an Ex SAS and Police Instructor and founded Defendo. I was honoured to teach with Mr Wolfe in America to the Special Forces and Marines and in Hungary, Europe to the Hungarian
Presidential Body Guard Team.

Over the last 15 years working every weekend as Bouncer/Doorman in many of the Night Clubs in Maitland/Newcastle, it has given me an education in practical real world altercations and a true insight into the world that is not covered in the Martial Arts Arena. This also includes dealing with the Police and Legal Systems.

For the last 12 years I have been fortunate to teach and train in the Philippines and Thailand. The Philippines has given me the opportunity to teach to the Marines/Police and Special Forces as well as conducting Body Guard training and assessing throughout the many areas in the Philippines. In 2015 I was honoured to be inducted into the Philippino Hall of Fame – Master Instructor of the Year.

The last couple of years due to the demand for extra Martial Classes and specialised training in Security/ Body Guarding/ Children’s Martial Arts I re-branded the business to a full time Martial Arts, Fitness and Rehabilitation Centre – Kombat Academy. The business has grown exponentially to where we have employed extra martial Arts Instructors to cover the classes and provide myself the opportunity to teach overseas.

It feels like only yesterday that I was training with family and friends in the pursuit of improving my martial arts skills and admiring and trying to emulate my instructors. I have students starting at the age of 4 and I can see the same excitement on their faces
that I felt when they tie that White Belt on and step onto the training mat for the first time.

My own journey continues and I have been fortunate to train with many great Martial Artists in various styles, too many to mention but never forgotten. Everybody improves you in some way if you keep an open mind, I say to my students always have white belt mentality and enjoy every step on your journey because you never know where it will lead.