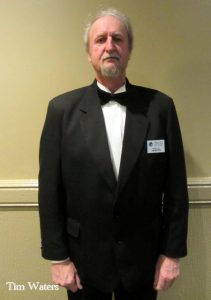 Inducted into the A.M.A.H.O.F.(Inc) for 2015
Lifetime Achievement – Aikido

Inducted into the W.K.U.H.O.F. for 2015
Lifetime Achievement – Aikido

Tim was first introduced to Martial Arts by way of a 10 week course in Judo in 1963. He moved through the Kyu ranks quickly gaining 1st Kyu in 1965. He was introduced to Aikido in 1966 when Aikido Master Seichi Sugarno visited Tasmania.

In 1969 Tim moved to Hobart and was approached to take over the running of the University Judo club. He introduced a structured study of Aikido at the Uni club in 1970. He also took the position of Secretary and later President of the Tasmanian Amateur Judo Union and was National Vice President in 1972. In the same year he was a Silver medallist in the State titles.

He also played a key role in bringing Judo & Aikido Sensei “Taka” Nakajima to Tasmania In 1972 and negotiated his appointment to the Tasmanian Police Judo Academy in 1974. With Nakajima Sensei Tim co-founded the Fuji Ryu Aikido Federation of Australasia in 1978.

When Nakajima Sensei returned to Japan in 1981 Tim was requested by founding Master Sugawara to take over and progress the teachings of Fuji Ryu and conduct all rank examinations. This lead to Tim establishing Fuji Ryu Aikido in New Zealand and the South Pacific as well as assisting in the establishment of the new Dojo in Tasmania.

In 1983 Tim was directly involved in the establishment of the Tasmanian Martial Arts Council, and was elected to the position of inaugural President from 1983 to 1988.

Tim also has a number of publications to his credit including “The Nakajima Years” and a write up of the “Fuji Ryu Comprehensive Aikido Handbook”.