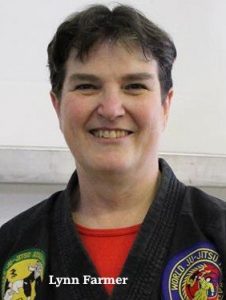 Lynn started training in Judo in 1975 as a school sport and went on to join the Newcastle PCBC in 1977. Her first Judo Instructor was Sensei Jim Black and her Judo career was productive thanks to the encouragement received from her parents and a chance to compete at State, National and International level. She received her Shodan in Judo in 1994.

One of the Sensei who had the most influence on her career was Shihan Johny Whipp who taught her about the history and traditions of Judo and it’s foundations in Ju Jitsu. In 1990 Lynn she started Ju Jitsu at Williamstown Ju Jitsu club under the instruction of Bruce Clack. In 1991, both being defence force members, Bruce and Lynn attended the Military Unarmed Combat course being run in Townsville with Chief Instructor Johny Whipp.

When Bruce was posted to Brisbane he left Lynn and another Brown Belt to run the club and she became the Senior Instructor due to her Level One and Two accreditations in Judo.

Eventually in 1996 Steve and Lynn started our own Dojo at Cardiff the name they chose for the was Dojo Ha Ya Tsume Ryu. Lynn gained her Shodan in Ju Jitsu in 1997 followed by Shodan in Kobudo 2000. Lynn was invited to become a member of the International Close Quarter Combat Instructors Association 2001; this was a great honour as there are only 30 members worldwide.