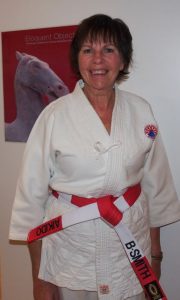 Inducted into the W.K.U.H.O.F. for 2015
Lifetime Achievement – Aikido

Not only a part of Aikido locally from its early establishment days, Bronilyn is known nationally and internationally for her pioneering work in developing community and personal safety self-defence programs utilising her extensive martial arts background.

Commenced Judo at the Launceston YMCA as a 16-year old in 1962 and was YMCA Women’s Open Judo Club Champion in 1966.   Her introduction to Aikido began under visiting Victorian Shihan Arthur Moorshead in 1964.

Bronilyn was part of the establishment of Aikido in Tasmania, from the formation of the Launceston Aikido Club in the 1960s (Head Instructor Seichi Sugano Shinhan), to her foundation roles with Fuji Ryu Goshindo Aikido Australia, both administratively and in a teaching capacity – 1970s (Head Instructor Takeshi (Taka) Nakajima Shihan), to present.

The author of two best-selling self-defence books, her initial publication, when launched by Pelhams UK, was the first by an Australian author to be published internationally on the subject.

Her second book The 3-Day Self-Defence Manual, was not only published in English speaking countries but it was also printed for S.E. Asia by Readers Digest. There is a Polish edition, and remarkably, it was transcribed into Braille. Another book, Self-Protection for the Elderly, was translated into Japanese. Her works are held in libraries internationally from Europe and the United Kingdom, to the Diet (National Library of Japan).

While continuing to teach and promote traditional Aikido Bronilyn also devised, taught and introduced her community self-protection training programs nationally. From specific school, disability and elderly programs to the more broadly based which encompassed a wider public profile.

Programs were produced and implemented across media platforms – print, video, and audio – for both Federal and State Government Departments as well as private enterprise and the ABC. Bronilyn also appeared regularly on national radio and television.

Appointed by the Federal Government to a Senate committee on Women, Sport and the Media, their 1985 report and recommendations to Parliament were pivotal in bringing about a ground-breaking shift in the establishment of equal rights for women across sporting codes.

Bronilyn was an original selection committee member for the Tasmanian Sporting Hall of Fame – a role she continued for ten years. She also initiated the foundation of Sportswomen’s Association of Tasmania and became inaugural chair of the organisation.

Bronilyn was also a foundation member and past Chair of the Tasmanian Martial Arts Council.

On the business side, Bronilyn started her own Tasmanian-based national company, Defence Dynamics Pty Ltd, which she ran over many decades. She was a foundation member of Women Chiefs of Enterprises – International in Tasmania as well as the State representative for the Australian Society of Authors for over 25 years.

University of Tasmania Bachelor of Arts 2007

Do YOU know anyone who you can recommend for membership of AMAHOF?
Nomination forms for the 2021 presentation ceremony in Sydney will be available here later in 2020.