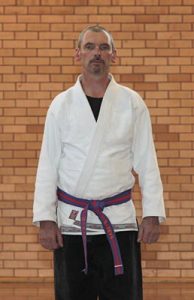 Scott Teys, Shihan, first started training with Peter Morton Academy of Judo, Jujitsu and Karate when he was 10 years old at the Tharwa branch ACT in 1979, training under Sensei Granville Crawford. During this time he graded up to orange belt. After a brief hyatus he then re-joined the Tharwa club in 1984/85 and began training at the senior level under Sensei Tony McInerny.

Scott successfully graded to Shodan in August 1992. In 1993 Sensei McInerny gave the responsibility of the Senior class to Scott. He held the Senior Chief instructor role until 1998.

During this time Scott also assisted Sensei Peter Wilson (AMAHOF 2001) with opening up the Kaleen branch in October 1992 by being on the exhibition team and later assisting with instruction of students.

After running the Tharwa Seniors Class he then joined up with Shihan Dave Burgermister (AMAHOF 2008) to start up the Turner branch at the Turner PCYC in 1998.

From 1997 to 2000 he also was the Black Belt instructor with Dave Burgemeister of the PMAJJK Canberra Branches Shodan course, and successfully trained the nominated students through the 18 month course to all passing their grading in 2000.

In 2004 Scott then took over the role of Chief Instructor of the PMAJJK Queanbeyan Junior and Senior branch and has remained there to the current day. 2014 will see Scott’s tenth anniversary as C.I. of the Queanbeyan branch, which was the first PMAJJK branch opened by Soke Peter Morton (AMAHOF 1997) back in 1962.

Over the years Scott has organised and participated with many club events. The Queanbeyan Branch under Scott hosted the Nation Seminars in 2006 and 2012 and assisted in organising the 2007 Seminar . Scott has officiated and presided at many Academy Kyu and Dan gradings and has served on various Academy committees in different roles. Currently Scott is the National Chairman, which he has held since 2011. 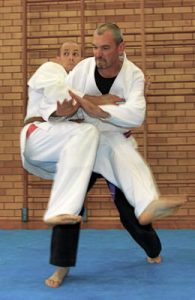 On a personal note Scott says:

“Throughout the years I have taught hundreds of kids and adults, and hope I have had some influence in their life teaching them respect and self-discipline.”

“I am an active member in my community. I was a volunteer bush fire brigade member for nearly 20 year and have fought many bush fires. During the 2003 Canberra bush fire disaster I managed to save several houses in the hardest hit superb of Duffy.”

“I am a qualified automotive mechanic and have also gone on to complete a post trade course in advanced diesel and heavy vehicles. I am just about to start a 3rd apprenticeship in automotive electrical. I am considered the go to person by my friends and neighbours when it comes to advise on motor vehicles.”