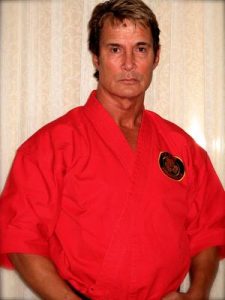 Soke Richard Norton is considered to be Australia’s most successful Martial Arts export with over 53 years training in the Martial Arts and a movie career spanning some 35 years.

He holds a 5th degree Shihan ranking in International Goju Ryu Karate, personally presented to him by Hanshi Tino Ceberano, an 8th degree in Zen Do Kai Karate (An Australian based freestyle co-founded with Soke Bob Jones in 1970), a 4th degree Black Belt in Brazilian Jiu-Jitsu under world renowned coach, Jean Jacques Machado and a Level 6 Kick Boxing ranking under Benny ‘The Jet’ Urquidez. Most recently he received a 5th Degree Master ranking in Chun Kuk Do, personally awarded and presented to him by the legendary Chuck Norris.

Soke Norton is in constant demand for seminars all over the world, covering such topics as Reality Based street defense, martial arts weapons drills and Black Belt Flow Complexes. He has trained extensively in the U.S with such Martial Arts legends as Benny ‘The Jet’ Urquidez, Fumio Demura, Bill Wallace, Pete ‘Sugar Foot’ Cunningham, Rigan and Jean Jacques Machado and of course his old friend, Chuck Norris.

Richard’s movie career started in 1979 as the head enforcer ‘Kyo’, in Chuck Norris,’ The Octagon’. He went on to work with Jackie Chan in Hong Kong in the early 80’s in a movie called ‘Twinkle, Twinkle Lucky Stars. He later co starred in City Hunter and had a co lead in Chan’s, ‘Mr. Nice Guy’. In fact Norton is the only western Martial Artist ever to be invited back to work on more than one project with Jackie in one of his Hong Kong movies, which in itself is a remarkable testimonial of the respect Mr. Chan has for Richard’s acting and action abilities. Richard has just finished acting in and Fight Coordinating the latest Mad Max, ‘Fury Road’ movie, to be released in May 2015.

Richard Norton now has over 80 movie and television roles to his credit. Aside from acting, Richard is also highly sought after as a 2nd Unit Director and Stunt/ Fight Coordinator.