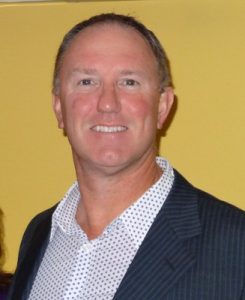 Peter James has been involved in the Martial Arts for nearly 40 years and has a passion for edged weapons . He started training in Kenpo Karate in 1974 with Ezekiel Daniel at the Scarborough YMCA. In the late 70’s he studied a number of different styles including Wing Chun Kung Fu and Bando Banshi Kick Boxing. In the early eighties, Peter trained in Tae Kwon Do with Master Raymond Tan. He was involved in a number of tournaments around Australia and has referee qualifications.

Peter commenced training in Japanese Swordsmanship (Kenjutsu) in 1987 under Eiji Morozumi and has been awarded the rank of Kyoshi. In the last 25 years he also studied several different styles of tactical and edge weapons and empty hand in the USA and in Australia, these included Kali, Aikijutsu, Ninjitsu, Pencak Silat Japanese sword, fencing, rapier fighting and American and Asian knife work with instructors such as Peter Siebert Sensei, Hans Fricke Sensei, Toshishiro Obata Shihan, James Keating Master at Arms, Joe Pechinsky Olympic Coach and Master at Arms, Lyndsay Hawk Sensei, Hock Hockheim and various military personal. He has attended a number of seminars on Western sword styles including German Long Sword, Rapier, English broad sword and English Bo.   Working with Sifu James Keating has always been particularly rewarding, Jim has a unique way of teaching people how to think. Hans Fricke Sensei has been largely responsible for the development and training in Tameshigiri at the WA School. .

In 1998 Peter formed the WA School of Japanese Swordsmanship where he teaches a blend of the techniques from a number of styles. He also operates the specialist organisation Combat Dynamics, which runs seminars on practical knife defense for various martial arts schools around the state. In 2003 Zen Ken Ren Seitei Iai was added to the WASJS syllabus under the WAKR (Ramon Lawrence 6th Dan Renshi and Ah Loi Lee 7th Dan Renshi). Peter has attained the level of 3rd Dan. 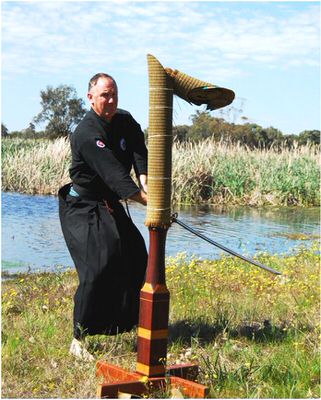 Peter has an extensive martial arts library and studies military history and associated strategy and tactics. He has a collection of Japanese and Western military antiques which compliments his interests and training. He has travelled to Japan to visit and study a number of battle fields and famous locations associated with the Samurai, and other overseas military historical locations.

Peter has had over 20 articles published in various magazine, mostly on sword and knife work. In addition to his martial arts qualifications Peter has qualifications in Engineering, Management, has a Masters degree in Business, a Graduate Diploma in Adult Education and Level 4 Certification in Training, and Level 1 Coaching Certification. He operates his own HR consulting business specializing in executive coaching and assisting people who have been made redundant to find new roles. Peter coaches AFL football at the Warwick Greenwood Junior football club. He is married to Mary and has 4 sons.

More information is available at the following websites: