I am at the time of writing this personal brief a fifty two year old woman who has been faithfully married for thirty three years and have successfully raised two daughters into adult hood while also working in both full time and part time jobs and in 2009 attained my fourth Dan in Shotokan Karate. I first started training under Sensei Ray Irving the Chief instructor and owner of Counties Shotokan Karate New Zealand when my two young daughters expressed an interest in taking up karate and found that I had finally discovered a passion for karate and have trained diligently ever since. At first I was Sensei Ray’s student, then became one of his instructors and went on to manage his Waiuku Dojo in 2002, from there I also started teaching classes in the Pukekohe Dojo and was the primary instigator of seeking out and opening two more dojos for the Counties Shotokan Karate association of which I am head instructor of one. I have now been teaching five nights a week for the last seven years while still managing to keep up my own training.   I have coached and managed teams who have competed in Okinawa 2007, Germany 2008, U.S.A 2010, Romania 2011 and Spain 2013. I have also participated in Seminars with Sensei Ray Irving CSKANZ, Sensei Ray Dalke TKO U.S.A, Hanshi Peter Brockers IKF Germany, Joe Mirza TKO U.S.A, and Sensei Kanazawa. 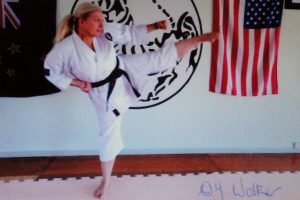 Counties Shotokan Karate holds two tournaments a year where I assist Sensei Ray in organising, running, judging and refereeing these events. I have been the primary organiser for the fund raising that has allowed the club to receive visiting instructors as well as sending the teams overseas to compete. Sensei Ray also trusts me to manage his association in his absence.

I train a junior squad team for tournaments and have had many who have gone on to compete successfully in tournaments both here and overseas. I also teach a sixty years plus class once a week where the students are taking up karate for the first time in their lives. The eldest of who is at present seventy nine years old. This is very much a thinking class and although I keep it traditional I still have to modify the training to suit the needs of these women. I have also added self-defence for these women in the hope that it would give them something in this age where the elderly are no longer given the respect they deserve and are no longer safe out there.