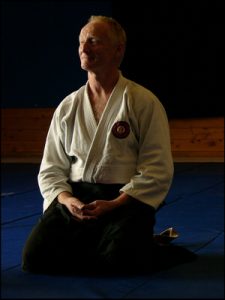 Returning to New Zealand after living and travelling through various countries for the previous 10 years, Danny’s desire to practice a martial art led him to Aikido and the Riai Aikido dojo in late 1985.

He found himself captivated by the harmonious way of using energy of others to reconcile differences and resolve conflict in a positive way. This has continued to enthral and motivate Danny’s learning and inspired him to explore this concept further through other forms of collaborative community building and enquiry over a 10 year study period with the anthropologist and transpersonal therapist, DR G.A. Lahood. Danny is involved in assisting in personal growth enquiry workshops both in New Zealand and Australia. Danny’s understanding has been that learning is often dependant upon what we teach ourselves about our selves. New possibilities can be created and we open the self to new perspectives. He invites and encourages his Aikido students to become part of this awareness and allow for the potential of self-discovery while on the mat. The possibility then exits for our dojo learning to be integrated into our daily lives.

In 1992 Danny was awarded his Shodan Black Belt and at the request of the departing Sensei commenced teaching adult students. The need for a junior class became apparent and together with two other Shodans started the Aikido for Kids Class in 1993. This highly successful class attracted up to 30 children ranging from 6 to 12 years of age. Later, in 2000, Danny founded a Youths Class for 13-16 year olds as a bridge to the senior classes. 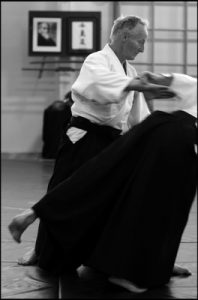 Danny’s passion for the development and growth of Aikido has led him to become a founding member of the Aikido Association of New Zealand. His passion has also seen him to be a key facilitator of the Riai Aikido National Friendship Camps and seminars involving international guests over the last 20 years. These are frequently the largest live-in camps held in New Zealand and Australia.

In 2011 Danny attained the rank of Yondan, 4th Degree Black belt and is currentlty dojo-cho and senior teacher at the Riai Learning Centre and also mentor and supporter of two children’s classes in Auckland.