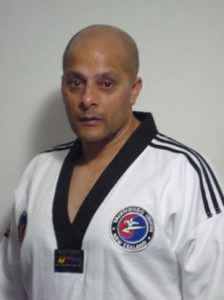 Currently I am the instructor of Capital City Taekwondo Club Avalon, Lower Hutt, Wellington. The club has approx 45 students, including both my daughter and son .Daughter is 2nd dan blackbelt and assistant instructor. Son is junior Black Belt.   Training is twice a week with a childrens class and adults class, and when occasions call more often.   We also attend many tournaments during the year and also have in our club Hayley Schofield who is a member of the New Zealand team who has attended many championships over the year including world champs and commonwealths. We also have a Combat Hapkido Club who use our premises allowing cross training.

I have organised and also presented at numerous instructor camps for TUNZ, along with junior development camps and tournaments for Lower North Island. These camps would involve anything up to 60 students staying at a camp for the weekend. I have also organised weekend instructor camps at various venues with presenters from other arts, sports and first aid courses. Also been a presenter at the camps presenting Poomse, Refereeing, teaching or grading, as well as successfully running Poomse Seminars throughout New Zealand and training Seminars.

Being an examiner I am often invited to conduct gradings, combed with training for the day which would involve self defence, Poomse and the grading syllabus. I have enjoyed running referee seminars throughout New Zealand including a certified course including up skilling to become a presenter in Australia. New Zealand now has its own system. The course was run for Taekwondo New Zealand the main Taekwondo governing body. The course was designed so referees can up skill over certain years to become an International referee. I was awarded a commendation from WTF for this.

Over the years I have also personally competed in tournaments including fighting, and won Nationals in Poomse approx 3 years running including all other events in New Zealand under TUNZ. I have also competed in Australia, after which time I began running Poomse seminars in New Zealand and was one of the main instructors to help standardise these in New Zealand. Now at tournaments, I am also an Oceania Taekwondo Union 2nd class Poomse examiner in the Poomse competitions.

During the year TUNZ hold local tournaments, North’s, South’s and Nationals where I am the senior referee and on occasion also the tournament director. On top of these events I also attend events held by Taekwondo NZ including the TNZ open which also include overseas teams. My role here is to set up scoring systems, help set up rings, make sure all referees are informed of rules, manage referees and help with protests. This also means keeping up with the latest rules with the rest of the world and introducing them at our events. I also attend overseas events when selected and represent New Zealand as a Referee. I have received Commendation and Citation letters from WTF and Kukkiwon for commitment and development towards Taekwondo in New Zealand.

I have been a Referee in New Zealand for over 20 years and have refereed at all events in New Zealand. 7 years ago the opportunity arose for me to attend a International Referee Course in Sydney Australia. I attended, passed and became an International Referee. I now get selected and invited overseas to referee at WTF events. It was very special to be selected, to referee at the Sydney Youth Olympics, Australian Open 2012, Commonwealths in Canada, 4 Oceania’s Champs, World Cup Team Champs in China and Junior World champs in Egypt. Also attended referee refresher courses   in India and New Caledonia.   As an international referee, it is paramount to attend certain number of events and refreshers over a time period to keep certificates valid and to work towards First Class Cert in refereeing. Being an International Referee has lead me to meet the President of World Taekwondo Federation and President of Kukkiwon and also to Referee the best fighters in the world.

Presently I am also a member of Taekwondo Union NZ Committee , as technical chairman and executive member. This involves as a committee, carrying out duties for the day to day running of the TUNZ by helping out other examiners, instructors and clubs with their day to day running of their clubs. Before been elected on the Committee I spent a number of years helping the committee. I am also on the TNZ referee committee helping with rule changes, selection of referees for international events and keeping TNZ updated with electronic Body Pads and systems. I am on the Oceania Referee committee helping with matters to do with the region, i.e. referee selections for local events like Oceanias.

I have studied under Master Dave Warren of Australia, Grandmaster Park (one of the founders of our patterns), Grandmaster Ikpil Kang and Grandmaster Ky Tu Dang (both world champs in patterns). Also with Grandmaster Lee, who started the Taekwondo Federation in New   Zealand. Shinan Chris Gower (Kyokushin Karate), Grandmaster John Pillingreny (International Hapkido Federation), Shihan Steve Wass (Aikido) as well as other great instructors in New Zealand and from overseas. One of my highlights was training with Bill (Superfoot Wallace) when he was in New Zealand.

In 2011 I was also inducted into the New Zealand Martial Arts Hall Of Fame.

Married to Neema who fully supports my second life with TKD as do my children Selena and Jaiden. By trade I am a Motor Mechanic and own and operator a business in partnership ‘Page European’ specialising in European Cars.

Born 1965, Wellington, New Zealand. Origin of Indian descendant, but a real Kiwi at heart and fully support the ALL BLACKS.