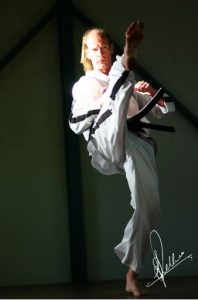 I began my Taekwon-Do training in Papakura Auckland in September 1980. My first instructor was Mr Olly Olsen. We were part of the South Pacific Taekwon-Do group headed by Master Young Ku Yun.

From mid-1983 my second instructor was Mr Thomas Tamakore. I was now training four nights a week in Taekwon-Do as I still do today. I received my 1st Degree Black Belt in June 1984.

In June of 1985 my students and I joined joined the Lim’s Taekwon-Do group in Hamilton. Willie Lim was one of the pioneers of Taekwon-Do in NZ emigrating from Malaysia in 1969.

During the next 5 years Mr Lim provided us with the opportunity to train with many famous International Masters among them. Professor Wally Jay, Professor Remy Presas, George Dillman, Fumio Demura, Bill “Superfoot” Wallace, Benny “The Jet” Urquidez and William Cheung. During this time I travelled to Australia and the USA to train with William Cheung, Dan Inosanto and Master Chai Sirisute. I hosted several Thai Boxing seminars in NZ for Master Chai Sirisute and Kali / Thai Boxing seminars with Terry Gibson (An instructor under Dan Inosanto).

In 1991 Willie Lim immigrated to the USA and my students and I joined ITFNZ.

I have competed actively in tournaments since 1984 and have placed consistently throughout the years. One highlight was to win the veterans sparring division in the ITKD Nationals in 2011.

Since 2006 I have been involved in coaching the New Zealand National Taekwon-Do Team. Firstly as assistant to Dave Ballard then after his death in 2009 as Head Coach. Currently Head coach for the NZ Team preparing for the ITF World Champs in Benidorm Spain 2013.

In 1987 I began training in Balintawak Escrima with Grandmaster Bobby Taboada in Hamilton. I have taught this system in Auckland since 1991.

In 1995 I began training with the Shinryukan Aikido group. My first instructor was Mr Ron Evans then later Mr Jeff Waldron and Alex Pearson. Training 6 times per week I was promoted to 1st Dan in 1999.