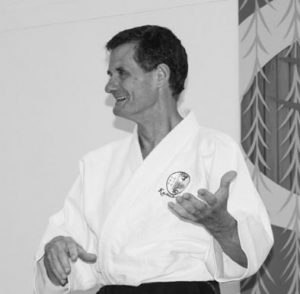 Ray started in the martial arts in 1979 when he and his wife Gail joined Chidokan Karate. After three years Ray switched to Aikido while Gail went on to be graded nidan in Karate before starting her Aikido career.

In 1982 he began his Aikido journey under the expert guidance of sensei Ron Russell. Sensei Russell graded Ray to Shodan in 1987, Nidan in 1988, and Sandan 1993. Ray trained with sensei Russell until sensei Russell’s death in 1993.

In 1992 Ray and his wife Gail set up the Kyu Shin Do Aikido organisation on Auckland’s North Shore and in 1996 opened the full time time dojo in Albany where they continue to teach today.

In 1995 Ray was accepted as the New Zealand representative of the Institute of Aikido UK by sensei Russell’s teacher, sensei Hadyn Foster. Sensei Foster awarded Ray Yondan in 1999, and Godan in 2006.

The Institute of Aikido New Zealand organisation was formed in 2007 with Ray as head of style and now has 3 affiliated clubs in New Zealand and over 70 members.

Ray trained with sensei Foster for over 15 years, attending several of the Institute of Aikido UK summer school events in England as well as hosting sensei Foster and his top students in New Zealand. Sensei Foster passed away in 2011.

Ray has taught at many local and some overseas Aikido seminars and continues to refine his learning and teaching of the art of Aikido, now under the guidance of Shihan Robert Nadeau of the California Aikido Association.