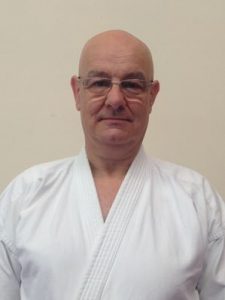 Emigrated to Australia in 1984 initially working in a small wheat belt town as a GP (Pingelly) before moving to Mandurah and setting up a new medical centre there. Worked as a GP there, Golden Bay, Secret Harbour and now back in Mandurah working as a skin cancer doctor.

Martial arts career started with Shotokan Karate International Australia in 1992. Obtained Shodan through them (under Kanazawa Sensei) in 1996. Karate study has continued to this day.

Also in 1996 started studying Japanese style Ju Jitsu and Okinawan Kobudo which are also still studied to this day.

2008 : Inducted into the Brotherhood of Martial Artists Hall of Fame

2009 : Raised $9,800 for Peel Health Foundation to go towards the building of the new Paediatric Ward at Peel Health Campus

2010 : Attended and taught at the Fight for Life fundraising event in Melbourne, Vic

2012 : Co founded Fight4Life WA Inc. Raised $6,000 for cancer research through the dojo. Attended and taught at the Fight for Life fundraising event in Melbourne, Vic