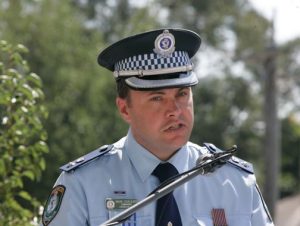 Inducted into the A.M.A.H.O.F.(Inc) for 2013
Budoka of the Year – Budoshinkai Karate Jitsu

Inducted into the W.K.U.H.O.F. for 2013
Budoka of the Year – Budoshinkai Karate Jitsu

Sensei Mark Szalajko was born and raised in Blacktown NSW. During his teenage years he attended Evans High School which was also located in the suburb of Blacktown.

In 1988 a Shotokan martial arts school began training after hours in the Evans High School gymnasium. It is here where his life long relationship with martial arts began.

Being a police officer was a double edged sword for Sensei Mark. Whilst, it assisted him to gain valuable skills and experience that have assisted his martial arts teachings, it was also problematic. As transfers from one station to another, were accompanied by a change of residence and due to distance and practicality a change of martial arts schools. This saw him train under many teachers and in a variety of styles such as kickboxing, ninjitsu, kokyushin karate, Karate Jitsu, Muay Thai, Kempo Jiu Jitsu, Kobojutsu and Shotokan karate. He has also trained in Okinawa, Taiwan, Fiji and Hawaii.

In 2009 and again in 2010 Sensei Mark was the ISKA Black Belt Competitor of the year and was inducted in to the ISKA Martial Arts Hall of Fame.

In 2010 Sensei Mark opened up his own school in the Macarthur District. It really was humble beginnings; he started with two students, his two kids Jessica and Andrew in a community hall.

Bujutsu Martial Arts Centre was run on a part time basis until August 2011 when the school went full time. Early in 2012 Sensei Mark retired from the NSW Police Force after 23 years of service, in order to pursue his dream of being a full time martial artist. The school has grown considerably and now boasts, Karate Jitsu, Muay Thai, BJJ, Arnis, Kids Karate, Kids Muay Thai, Yoga, Zumba, a personal trainer and weights room. The school currently has 247 members.

Having been one of Australia’s most senior police officers, he is well aware of the types of threats we are likely to face from attackers. Sensei Mark has travelled widely and dedicates much of his time teaching self-defence skills and providing personal safety tips to vulnerable members of society such as children, women and persons with an intellectual disability.