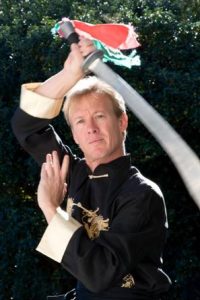 Sifu Jason King has been studying martial arts for over 24 years. Jason is highly regarded in the martial arts community for his great skill and comprehensive knowledge of martial arts, and his excellent, accessible teaching style.

In 1990 Jason met Master Yi-Yen (Ian) Lee, who was at the time founding the Wu Zen Dao School in Brisbane, Australia. Initiated by Master Ian Lee, Jason was inducted as a disciple (private student) and trained daily in both the Internal and External martial arts. Jason lived with Master Lee for a year and in 1992 they travelled to Taiwan to meet and train under Master Lee’s own Grandmasters. By 1993 Jason achieved the rank of Tai Ji Instructor, and the following year that of Shaolin Kung Fu Instructor. In 1995, Jason took over the running of classes at the school.

Jason has several referee accreditations including a 2nd level national judge within the National All Styles Tournament circuit. As a competitor, Jason has received well over 100 trophies in various tournament categories including forms, demonstrations, weapons and fighting. The combat events included points sparring, grappling, push hands, continuous fighting and full contact bouts in various competitions. More than 30 awards have been for State, National or International Titles. Proudly, Sifu Jason can boast several National Title holders amongst his ranks.

Jason has coaching qualifications recognized by the Australian Sports Commission (ASC). As well as having the school registered with the Martial Arts Industry Association (MAIA) which is the peak Industry body for Martial Arts in Australia, Jason has been involved on the Queensland committee of the Kung Fu Wu Shu Australia (KWA). In addition to his martial arts work, Jason is an accomplished stage Fight Director, one of only 8 recognised in the country with numerous stage and film credits.

In recent years, Jason trained in several security courses, culminating with not only security qualifications and extensive work in the security industry, but certification as an Executive Protection Officer (bodyguard) as well. Currently Sifu Jason is involved with the World Harmony Society and has commenced studies in Traditional Chinese Medicine. These both support the holistic approach given to the academy and it’s members.

2013 continues to see Sifu Jason and his school in high demand for demonstrations, workshops, and displays with regular invitations to perform at National Titles and International events. In the near future, there are plans to expand the academy and to publish several books and DVDs.