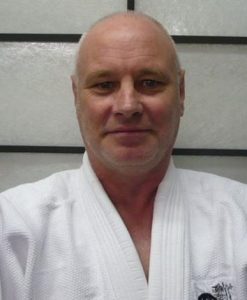 James Anthony Salter was born in Margate, Kent, England on 18th December 1995. He moved with his family to New Zealand in 1961 and grew up in Christchurch. He was the eldest of three boys.

He has always been active in sport, representing his High School, Canterbury Secondary Schools, Canterbury, South Island and National Youth Team in soccer. Throughout this time he has also had a passion for the fighting arts, and in particular jiu-jitsu.

In May 1967 he began training with Sensei Hendrikus (Henk) Fekkes, a Dutch judo and jiu jitsu practitioner who emigrated to New Zealand in the ‘50’s. At the same time he also began boxing with Gerry Kampjes. Around this time also he trained with an old judo sandan from the original Otani School of Judo in Britain, Herbert Emberton. This was at Herbert’s home, and James trained for a few years with Herbert each week, later helping Herbert to open a judo club above a local library in Bishopdale, a suburb of Christchurch.

During this time James also met Sensei John William Bonniface. He owned a classic jaguar, and Herbert was a Rolls Royce / Vandanplas spray painter before retiring to New Zealand, and continued working from his garage. Sensei Bonniface gave early tuition to James, at the house (the tatami was a canvas pegged out on the back lawn, with straw laid underneath).

James continued training though 1967 – 1972 with these instructors but in 1972, James began training with Sensei Paul William James Reti, one of Sensei Bonniface’s first Shodan’s in Jiu Jitsu.. Still maintaing contacts with Sensei Fekkes, and Emberton, James trained in the Fuji Ryu Goshin Do Jiu Jitsu style where Sensei Bonniface was the chief instructor for the organization outside of Japan.

James was the first to gain Shodan from the original group of black belts that were graded by Sensei Bonniface, and the only one to be graded full Shodan without a 12 month probationary period. He graded Shodan 27th April 1980 before Shihan Bonniface and Sensei Reti, following 13 years of training in Jiu Jitsu.

Through the period of 2 years at brown belt from 1978 to his Shodan grading, James was training up to 12 formal sessions per week, with Sensei Reti and Shihan Bonniface in Jiu Jitsu, Judo, Karate, Aikido and Iaido.

In 1979, James was encouraged to start his own dojo, which he did in the old Bromley School. He later that year negotiated with the local council and secured sole use of an old scout den on the school grounds. This became the first permanent dojo of a club in the Fuji Ryu Goshin Do Jiu Jitsu organization, and was called Furui Ryu Eda.

This original dojo was handed onto Sensei Simon Polaschek who subsequently past away, and it was then passed onto Sensei Paul Stokes, one of James black belts.

The dojo succumbed to arsonists around 2005, but a new building has been erected 100 meters away and Sensei Paul Stokes continues to teach there today, albeit it under his own style – Furui Ryu Jiu Jitsu. His style is named after the club James started in 1979, where Sensei Stokes gained his Shodan in 1985. Now a Godan, Sensei Stokes has close links with an Australian Jiu Jitsu organization.

James gained his Nidan 28th June 1982 through Shihan Bonniface on Shihan’s return from Japan. In 1985, on the death of the founder of Fuji Ryu Goshin Do Jiu Jitsu, Gesshu Sugawara, the Jiu Jitsu organization was handed onto Shihan John William Bonniface.

Fuji Ryu (Aikido) was a separate side of the organization and this was left under the control and responsibility of Sensei Tim Waters, from Tasmania.

James was graded Yondan by the same panel 23rd October 1989.

During the period 1987 onwards, Shihan Bonniface stepped back from the running of Fuji Ryu Goshin Do Jiu Jitsu to concentrate on his other martial arts interests. He left the running of the organization to the active Yudansha panel led by Sensei Stan Taylor.

Over the next few years there was little cohesiveness between the clubs within the organization. James spoke with Shihan Bonniface but he was not prepared to shift his focus, as the clubs themselves were still going well. Training was as it had always been – hard, and that was fine with him.

In October 1992, the first combined Fuji Ryu Goshin Do Jiu Jitsu Gasshaku took place at Wainui, on Banks Peninsular and it was clear to James that he needed to make some decisions about his club’s future in the organization.

On the 8th November 1992, James and his most senior student Sensei Alistair Thompson attended a black belt meeting and tendered their resignation from Fuji Ryu Goshin Do Jiu Jitsu Organization, citing unhappiness with the direction the organization was taking and lack of leadership. It was an amicable resignation. And James continues to this day with close ties to Fuji Ryu Goshin Do Jiu Jitsu, the students, instructors and senior leaders of the organization, including his instructor Shihan Paul William James Reti.

The 9th November 1992 both a happy and sad occasion. It was the first day of the new club – Sockburn Jiu Jitsu Club where James had his classes since 1986. The sadness was that Shihan John William Bonniface, his teacher, friend and multi disciplined combat specialist passed away that day. This was a huge loss to the NZ and International martial arts world. He had more than 30 Dan grades, all of which were awarded in Japan. He studied and completed his Physical Education degree in Tokyo, Japan at the Kokushikan University,. A university specializing in martial arts.

Grades were carried over by all to the new organization.

James was graded to Godan on 4th April 1997 by the yudansha panel of Sakura Kan Jiu Jitsu.

James was inducted into the New Zealand Martial Arts Hall Of Fame (NZMAHOF) on 7th September 2009 in Whanganui, New Zealand.

James was recognized by the International Soke Institute (NZ) with signatories Professor Steve Heremia and Kyoshi Gary Trail at the 2011 NZMAHOF awards with a 6th Degree Black Belt in Jiu Jitsu, title of Professor and acknowledged to all in attendance as one of the 4 “Who’s Who” of Jiu Jitsu in New Zealand.

James has been nominated for the Australasian Martial Arts Hall Of Fame (AMAHOF) and the World Karate Union Hall Of Fame (WKUHOF) for 2013 in the category of Life Time Achievement. On the 18th August 2013 at the awards he will celebrate his 58th birthday.

James has been studying and practicing jiu jitsu for the last 45 years. He has a passion for this art, and has been privileged to have trained with, and studied under some truly skilled martial artists.

He currently has students and clubs in Christchurch (2), Motueka, New Plymouth, Auckland (New Zealand) and Melbourne.

In 2013 he will be starting another club in Wellington, and also one in Blenheim, New Zealand. Throughout his training he has tried to ensure the same standards and skill levels were maintained across his clubs within his organization.

Shihan Alistair Thompson and Sensei Joy Thompson have been a huge support and the most loyal of students for many years. Alistair has been training with James since 1980, and Joy since 1988. They hold Godan and Yondan respectively.

James left school and completed a trade as a bricklayer. After this he spent time in the New Zealand Army (RNZIR) as a rifleman.

Upon leaving the army, he worked for the New Zealand Railways, where he gained his second trade as a NZR Coachbuilder.

He joined the New Zealand Prison Service on 12th January 1987 where he remains today. He began his career at Rolleston Prison in Christchurch. He has worked in Christchurch Mens Prison, Christchurch Woman’s Prison, Addington Prison and New Plymouth Prison, where he has been since 1994 when he transferred there with his family.

New Plymouth Prison is the oldest operational prison in New Zealand, being built in 1861 around the time of the Maori land wars.

In 1995 the prison service changed its name to the Department of Corrections, and over the years it has changed a lot. New Plymouth Prison will be closed by March 2013, and James will be working in Rimutaka Prison, in Wellington. He holds the rank of Principal Corrections Officer, and over the 26 years he has worked with minimum to maximum security prisoners.

In 1990, James was invited to be part of a group looking at developing a package for staff in how to deal with violent prisoners. There were 7 people on this project, considered for their expertise in this area.

From this meeting, Control and Restraint was born in New Zealand. At the first instructor course in Whanganui October 1990, 24 staff were trained in this new method, by 6 of the people at the inaugural meeting. From that course, only James and an ex US Marine traveled the country training people in the instructor course for Control and Restraint for the rest of the prisons in the country so that each institution had their own instructor group available to facilitate refresher training of 8 hours per year per Corrections Officer.

Everyone else from that inaugural meeting for Control and Restraint in 1990 are no longer with Corrections.

During his time in the martial arts, James has been involved in many areas within the community. Listed below are some things, not in any particular order:-

James is happily married to Catherine, and has 4 daughters (Megan, Leah, Jamie, Amanda-Jane) and a son Justin (deceased). James and Catherine have 3 grandsons, and 3 granddaughters. Their families are spread far and wide with daughters in Perth, Melbourne, Glenden (North Queensland), and Taranaki (NZ).

James has had support from his wife Catherine and children throughout his involvement in Jiu Jitsu and without this the journey would have been harder than it has been.