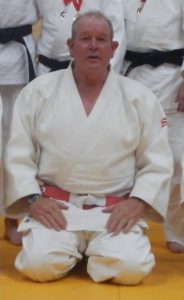 Born in Dunedin 1950, I enjoyed the quiet life being brought up in an environment where time was measured by the seasons, school holidays and the usual outdoor season of hunting fishing etc, with priority given to Rugby union during the winter months, for my generation, at school was compulsory?

My childhood was mainly in the high country in Central Otago, went to a 36 pupil, two room school. We enjoyed ice skating curling. Fishing with mutton bags and number 8 wire with a hammered out spear hear.

The family moved to the coast for high schooling to a large metropolis of 3,500, Balclutha, a town in South Otago, spent early teens, playing rugby, boxing. Holidays were spent with the local contract shearers making good pocket money.

Left school at 15 took on a trade as a butcher, lasted the apprenticeship, result, not much of cutter when latter on my way to Japan tried to get a job in Melbourne, with 36 stiches in my right hand to prove my lack of coordination. Two Dutchmen immigrated to Balclutha starting the local Judo club, I swapped at 16 from boxing to Judo.

As most Kiwis, I came to Australia in the late 60’s made enough money to follow my passion, after one year taking semi cargo ship from Melbourne to Japan to study Judo at Kodokan. Marama Stirling-senpai had organized a sponsorship with the Kodokan on a 3 year student’s visa.

Met another Senpai in Tokyo, Rick Littlewood, who suggested a country hick like myself would not last in the hustle and bustle of Tokyo, like many others it was at this time I quickly advised not to mention my butchering background and become a school teacher, lucky it was conversational English.

And being a good chatter, one thing I did lean as a butcher, I manged to lean a lesson one step ahead of the class.

Littlewood-senpai suggested I train at Doshisha University in Kyoto to train, and then on to the Kidotai (riot police) as I was 86kg and would be able to manage. As it turned out 86kg was about average with a lot bigger and better men in the Dojo. I did manage after a tough start. Those who have experienced strangulation, when coming back to consciousness, there is a buzzing sound in your ear, I believe it is the blood franticly pumping back to a staved brain, this noise created the sound like engine in your ear, and I had the same dream each time, I was on my motor bike going somewhere else, much was my disappointment to come around find myself still at the Kidotai dojo, training, with three ear torn riot policeman pushing my ribs high into the chest cavity, a rugged form of resuscitation. Early in my time with the riot squad this happened a number of times, and the dream was always the same.

During my three years in Kyoto meet and married my wife of 40 years, Akemi, and knew I would never go back to butchering.

In 1974 Returned to Balclutha New Zealand, big mistake, terrible shock for my young bride, end of the earth living with the near primitive deep southern Kiwis. To Akemi’s way of thinking. In 1975 I eventually join a company called Ecolab in NZ, as a sales rep, promoted to Division Manager and transfer to Sydney Australia 1980. We raised two Children, Mariko, who gave us two granddaughters, and Morgan who is also Martial arts tragic, and represent Australia a number of times, including the Athens Olympics in Judo.

In the 90’s we spent 5 more years in Japan as a Vice President of the Ecolab Japan KK, continued to practice at the Kodokan and Marunouchi Police Judo Club, coming home to Australia late 90’s as the Managing Director of Ecolab Australia. A long way from the butcher’s shop in Balclutha. I was a direct beneficiary of the discipline etched into me through Judo, the Sempai’s, Sensei’s who helped me in Japan and along the way in NZ and Australia, and calculators and spell check.

Currently I am the Managing Director Asia Pacific for Hydro Systems US Company, and in my retirement year. Akemi and I look forward to a life of travel, peppered with time with the grand children, fishing and contributing where I can to my lifelong frustration, the pursuit of knowledge and excellence in Judo. Time and physical ability has passed me by, but still live for that brief possible moment, when I might just experience clarity.