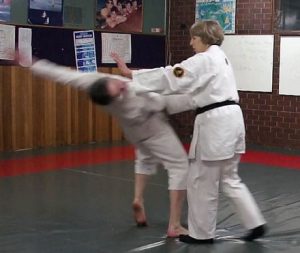 Inducted into the W.K.U.H.O.F. for 2013
Life-Time Achievement – Aikido

Her current gradings are:

She was under the direct instruction of the following:

She founded the Ashwood Aikidō Club in 1968 at the invitation of sensei Frank Dando 6th Dan Judō and was the founding member of the Australian Aikidō Association which was founded by herself and sensei John Gay in1970 at a meeting of the Ashwood Aikidō Club. She served as a Teacher and variously as Secretary, Treasurer, Women’s Section Coordinator and President on the AAA committee until her resignation in 1988. She served on the Victorian Martial Arts Board steering committee & later its committee on Women’s Self Defence to construct suitable syllabi for MAB schools.

She also taught self defence Aikidō at many community centers around Melbourne and in many schools over 25years. She was a Specialist Skills Aikido staff member of the Phys Ed. Dept of MLC Kew for 10 years and on leaving licensed her course to the school and supervised the installation of the succeeding teacher and packaged the theory component for delivery by the Phys Ed. staff.

In 1988 she founded the Aikidō School of Melbourne at Ashwood which she ran for 8 years, handing it over to sensei Rolf Summerhayes at Berwick & sensei Glenys Mallen at Ashwood in1995 on her departure to live in Tasmania. She returned several times a year to run seminars on Tomiki Aikidō & conduct gradings. Ashwood club continues under her 3rd Dan students Rob Cass & Mark Bean, both

Unity Aikidō 3rd Dans, who run it as Waverley Aikidō School & under license from her they teach the Unity Aikidō system.

In 2010 four of her Dan grade students moved to Broken Hill NSW & under her guidance & permission started a Unity Aikidō club in Broken Hill licensing the system from her. She has visited each year to give senior instruction, hold gradings & film syllabi.

Since 2010 she has twice held study workshops on the Judō/Aikidō Goshin Jitsu Kata at the Frank Dando Sports Academy for his students & for Waverley Aikidō Club & arranged its filming it for the Unity Aikidō syllabus.

In Tasmania she opened a full time dedicated Tomiki Aikidō Dojo at Port Huon dojo 1996 & founded Unity Aikidō. The Hobart full time dojo followed in 2000. In 2005 due to changes in the JAA syllabus Unity Aikidō was promulgated as an independent system based on the lifetime syllabus of JAA Founder & Headmaster Kenji Tomiki & reflecting his intensions for his Aikido style as conveyed to her by Tomiki Sensei.

Sensei Hanifa declined the offer to join the senior yudansha of the newly forming Shodokan Australia. This followed discussion with her insurance provider emphasizing the necessity of all martial arts to have their own Australian code of conduct and particularly national safety training guidelines covering all syllabi. She formulated her own codes to cover Unity Aikidō and obtained incorporation cover from her mentoring organization.

Hanifa Leoni sensei’s decision to declined the invitation by Shodokan Japan to join the Shodōkan Australia System was also due to the elite, competitive sport narrowness of the syllabus and the inflexibility of the technical system in not permitting independent continuation of her technical material she had developed over four decades and sourced from the direct instruction of Tomiki Sensei, Ohba Sensei, and their successors, particularly John Gay sensei. She decided to keep her syllabus alive by forming an independent school, having reached the age and experience where she felt she could satisfactorily accomplish this task.

When Sensei Macfarlane promulgated Unity Aikidō as an independent Aikidō system, she followed the example of Tomiki Sensei, 9th Dan, by his own award and Ohba Sensei’s 8th Dan, when they established their independent system of sport Aikido at Waseda University in Tokyo, Japan. She awarded herself the founding grade of 7th Dan witnessed by the Unity Aikido Student Body & Murshid F. A. ElSenossi, Unity Aikido Mentor & Guide .

This level of Dan was chosen by her after consultation with Aikidō colleagues and her spiritual mentor and guide Shaykh F. A. Ali ElSenossi and in the light of historical precedent through Tomiki Sensei’s actions and the teachings of John Gay sensei from his teachers regarding the requirement of 7th Dan being necessary to establish an independent system. This grade has been recognized by the Japan Aikidō Association in their letter of offer & subsequent award of 8th Dan JAA Aikido in 2011.

In 2007 she arranged the purchase of the full time Moonah Dojo & with herself as Trustee & with the current members, formed Unity Trust to raise funds & formed Unity Aikidō Association Inc. to be the owner. She licensed the name Unity Aikido to the UAAInc retaining it as her business name. A H.Q. dojo building was established in Moonah. The opening was attended by local, national & international

Martial Artists & many dignitaries. In 2010, the dojo moved to larger premises in Hobart CBD where it can be of even greater service to the community.

In 2013 it is intended to move the HQ dojo to Ogilvie High School in North Hobart where Hanifa sensei has taught several Unity Aikido courses.

Under her guidance insurance was arranged for all students through membership of the Unity Aikidō Association Inc. It is registered with the Justice Department as a Not-for Profit Sporting Association & is a full member of the Australian Jujitsu Federation providing its students with access to NCAS qualifications opportunities.

Judō Goshin Jitsu and Isutsu no Kata in Japan and Australia under Sensei Senta Yamada 6th Dan Judō & Aikidō, Asian Games Champion of Japan and the Aikidō sensei chosen by Master Tomiki to introduce his Aikidō to The West. Yamada Sensei taught Judō and Aikidō at the London Budōkan.

She is a practicing Contemporary Digital & Installation artist & student of Islamic Sufism.

Published:in “Artists and Galleries of Australia” by Max Germaine. “The Treasure” Sufi magazine.

Christened and confirmed Church of England at age 16.

Studied Esoteric Buddhism with Jikoson Sama, over 10 years visiting Japan and by correspondence.

Founded, with her husband Jamaludeen Macfarlane, Dawa’ir Al Jameelah; Circles of Beauty, an art business to produce Contemporary Islamic Art based on Traditional Principles in 2009.

She has now semi retired and teaches part time for Unity Aikidō at clubs, community centers & at After School Care Centers as an AASC qualified teacher through the Australian Sports Commission.

Currently she is writing a book on the Unity Aikidō System which will accompany electronic media on the whole syllabus with teaching notes.

She has visited over 45 countries across a lifetime of travels. She has been to Japan 5 times taking groups of students for extended visits twice. She lived & worked in the UK for several years, often visiting Europe on foot & by car, also she returned to Australia across Europe, The Middle East & South East Asia, traveling by car from the UK to Singapore then boat to Australia.

She has also visited India, Ceylon, The Middle East & America. She crossed Europe on the northern route through Russia by Transcontinental Express, then by boat to Japan & back to Australia. Recently, after Hajj Pilgrimage to Mecca & Medina in Saudi Arabia, she revisited Egypt 40 years after her first visit there. She travels interstate regularly for art commitments & to teach Unity Aikidō.

1996 Founded with Cathy Temby, “Down by the Riverside Inc.” a Non Profit organization, raised the funds to run a one day festival in the Huon Valley to help the local community celebrate its achievements & cultures to counteract the difficulties of it being an economically depressed region. Five thousand visitors came, the largest one day influx ever in the region. It helped change the tide.