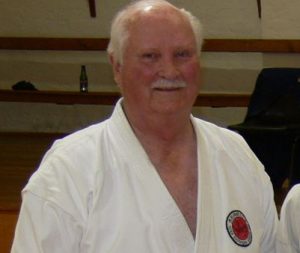 Inducted into the A.M.A.H.O.F.(Inc) for 2013
Instructor of the Year – Shotokan Karate

Inducted into the W.K.U.H.O.F. for 2013
Instructor of the Year – Shotokan Karate

He was fortunate that his position of Director of Tourism with Tourism British Columbia took him to Japan on a regular basis providing opportunities to train at the JKA Honbu dojo in Tokyo and at regional JKA dojos in Japan. Coincidentally the BC tourism office in Los Angeles was a few short city blocks from the dojo of the legendary Sensei Nishiyama 9th Dan of the JKA providing regular training opportunities. He received his Sandan grading from Shihan Asai 9th Dan World Technical Director of the JKA in 1991.

While living in Victoria Canada he was a member of the Japan Karate Association and the Canadian Shotokan Karate Federation. Frank ran a commercial karate school in Victoria Canada for ten years and served as a Director of Karate British Columbia an arm of the Canadian National Karate Association and the government recognized karate governing body in British Columbia. His Japan Karate Association accredited dojo in Victoria is still going strong and original students continue to contribute to the development of karate in Canada. “I was fortunate that the geographic location of Vancouver provided regular seminars with the living legends of karate. Frank and his family immigrated to Australia in 1992 and arriving in Hobart he visited all of the existing karate clubs and quickly settled on Zanshin Shotokan. “I visited the Zanshin (now Tora Shotokan Kase Ha) Club at the University of Tasmania where Sensei Steve Xepapas was teaching a class and knew this was what I wanted in a club and instructor. The training and camaraderie were great and the standard was world class”. Gradings for Yondan and Godan followed in 2003 and 2012 and Frank remains a member of Tora Shotokan Kase Ha.

Frank opened his own dojo at Margate Tasmania which continues as a satellite dojo of Tora Shotokan. The Margate dojo has 32 members including two Shodans.

The Australian Karate Federation was revived in Tasmania in 1995 with Frank serving as President of AKF Tasmania from 1994 to 2005. He remains a member of the executive committee. During his tenure as president the AKF Tasmania hosted the AKF National Championships for the first time in 2000. The AKF Tasmania also received a national award for the development and management of volunteers. While President Frank initiated the establishment of coaching accreditation (NCAS) and certification of officials by the Australian Karate Federation.

In 1994 AKF Tasmania was successful in having karate included in the Tasmanian Masters Games. As well as serving for sport coordinator for the event Frank satisfied a competition “itch” and at 50 years of age managed a gold medal in kata and silver in kumite in the open age division.

In 2012 Frank fulfilled a long time ambition and started training in Iaido and Jodo and is a member of the Australian Kendo Renmei Association training with Yondan Les Elliott at Les Elliott’s Karate and Kobudo Academy.