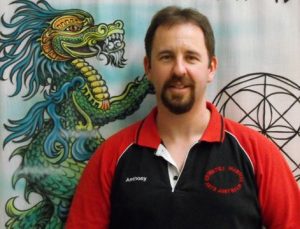 I am married to Kelly and we have 5 children who are all a part of the Academy—either training and/or teaching. We are a Plan Child Sponsor, sponsoring Jackson Isabirye from a village in Uganda (sponsor no 0227233) and we have been doing this for just over 2 years now.

In the past (approx 1997/98) I have been involved with McHappy Day for McDonalds doing Martial Arts demonstrations. I contributed sponsorship to a Special Children’s Christmas Party with 5AD (radio station) in 1995, and South Australian SES Volunteers Association in 2005. In 2011 we also sponsored a fundraiser for Child-hood Cancer through Limbo’s Gym.

In 2012 we won a Local Business Legends Award through Triple M (radio Station) for contribution to the community. Announcers from Triple M—Warren Tredrea and Dale Lewis (former AFL players) trained as Guests on the mats with students as part of their presentation to the club.

Like any teacher to reach the rank of ‘Professor ‘ or ‘Master’ takes many years of instruction, practice and patience. Although this has been hard work it has always been a labour of love for me. To run a full-time academy such as Crocodile Martial Arts Australia has been a lifelong dream for me.

My love for Martial Arts started in 1979 at the age of 8 years old. I have trained in many forms of Martial Arts since. It is with this knowledge and experience that I hope to offer students a very professional and unique training experience unlike any other in Australia . I have been fortunate to have studied and learned from some of the great Martial Artists in the world.

I worked in the security industry for more than a decade covering all areas of the job including personal protection for various celebrities such as —Elle MacPherson, Michael Jackson and Silverchair just to name a few. I am also a former member of the Royal Australian Air Force 24th Squadron.

I have trained overseas and taught in various states throughout Australia. I have featured in ‘Blitz’ and ‘Bujutsu International’ Martial Arts magazines on several occasion teaching techniques. I am an active member of Martial Arts Industry Association (MAIA) and Martial Arts Professionals (MAP).

In May 2011 I was invited to become a life member of the Elite Kenpo Council and to be the Australian Director and Board Member for all rank promotions World Wide. This has brought me much honour and pride. It is this honour and pride that I aim to instil in all students who train here at Crocodile Martial Arts Australia.

Since I began teaching I have graded students to Black Belts levels and above in the following arts:

Currently in our school we offer the following programs:

In addition to the above we have started offering:

Our current student base ranges in age for 3years old to 80 years.