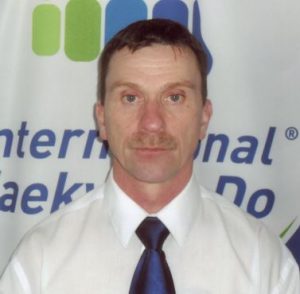 Inducted into the W.K.U.H.O.F. for 2013
Instructor of the Year – Taekwondo

I was born in London, England in April 1961 and moved to New Zealand in August 1973, soon after I became involved in the Martial Arts. I left School in 1977 to take up employment in the Textile Industry where I worked as a cutter for over 30 years. I am currently employed as a support worker assisting clients with disabilities. I also work part time as a professional Taekwon-Do Instructor.

I continued to develop my Taekwon-Do skills and thoroughly enjoyed the challenges that came with each passing grade. I was active in club demonstrations and participated in seminars and camps. I was part of the Australasian Demonstration team that performed at the Palmerston North Opera House in February 1978 under the guidance of Master Young Ku Yun (from Australia).

I became the Instructor of the Levin club in September 1987 and changed its name to Horowhenua. Over the years I have built the club membership up to become one of the top ten clubs (membership wise) in New Zealand. I am the only founding member of the original Levin club (1975) left that still trains/instructs who started at that club.

I was voted New Zealand Instructor of the year in 2001.

In 2008 I became a part time professional Instructor.

In October 2009 I opened up another Taekwon-Do School in a small town just North of Levin called Shannon. After the opening of that club I amalgamated the two clubs together under the name of Strike-Force Taekwon—Do Academy although both schools are independent from each other.

In the early days there were no Taekwon-Do tournaments available for Taekwon-Do students to enter in order to be able to test their skill level until 1978 just after I was promoted to Ist Dan.

In 1978 I became active in the tournament circuit within New Zealand and was selected to represent New Zealand on six occasions, although only 4 times officially, due to the cancellation of one international event and the lack of available funds for the other. I traveled to compete in Australia, Indonesia, Fiji and in New Zealand (televised). I have won regional titles in sparring and power and the national sparring title twice.

I fought in the New Zealand Kick Boxing circuit as a Taekwon-Do fighter in the late 1980’s and early 1990’s, winning the Wellington title in a then New Zealand record time of less than 10 seconds in December 1990. I competed for the New Zealand and South Pacific Kick Boxing titles, but was unfortunately beaten in November 1991. I retired from competition at the end of 1991.

I have coached the New Zealand national team at two World Championship events, Argentina in 1999 and Italy in 2001.

Both my Schools have consistently produced many national champions in sparring, patterns, power and special technique. One of my students became a world champion in the junior male special technique event during the Argentine ITF Taekwon-Do World Championships of 2009. Many of my students have gone on to represent New Zealand at international level.

I have set 2 New Zealand records during my competitive days in both Full contact sparring (fastest knock-out 1990) and Power testing (breaking 7, 1 inch boards with a side piercing kick 1991).

In 1984 – 2009 I was involved in the Horowhenua community education programme, teaching ladies self-defence and running general fitness classes.

In 2005 I became a member of the New Zealand Technical committee and a Regional Examiner. I was promoted to a Senior Examiner in 2007

I was inducted into the New Zealand Martial arts Hall of Fame in November 2009.

I am currently the head of the New Zealand Tournaments Advisory Group until the end of December 2012. I have officiated at regional, national and invitational tournaments. I was one of five iTKD members that officiated at the recent Taekwon-Do World Cup in Brighton, England in October 2012.

I appeared on the New Zealand National Television programme the “Good Morning show” teaching the host some self-defence techniques for four consecutive days as a promotion for the ITF Taekwon-Do World Championships of 2011 (that were hosted by New Zealand).

I have played soccer at a relatively high level for my local town’s soccer team, playing in the central league for over 6 years. Through my teenage years I represented my region in Soccer as an age grade player from 14 years old until I was 18.

My 6th Degree grading was conducted by Grand Master Pablo Trajtenberg (the President of the ITF Taekwon-Do Federation), and Grand Master Hector Morano from Argentina, who are both on the ITF Technical Committee. Certificate number NZ – 6- 7