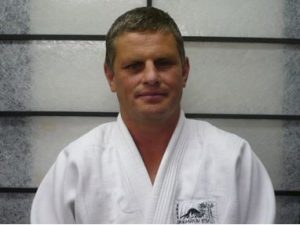 Favourite Technique: Any technique that delivers maximum pain and control to an attacker without injury

Favourite Saying: The difference between ordinary and extra-ordinary is the little extra

08th November 1992 – J Salter Sensei and I resigned from Fuji Ryu Goshin Do Jiu Jitsu Assoc, stating that we intended to continue to train in Jiu Jitsu as we have always done however we would no longer use the Fuji Ryu name. This marked the birth of the Sakura Kan Jiu Jitsu club.

24th March 1995 – I gained my Ni Dan – under J Salter Shihan at the Honbu Dojo in New Plymouth. This grading was designed to test the relevant areas to the grade of Ni-Dan. The following aspects were tested.

To date Alistair is the only person to have gone through this type of grading for Ni-Dan. This was to assess his character for the suitability to take over the leadership of Sakura Kan Jiu Jitsu should something happen to James Salter, Kancho.

11th April 1999 – I gained San Dan – Under J Salter Shihan, at a Gasshaku in Hanmer. As part of this I was given the task of rewriting the Sakura Kan Syllabus.

In my martial arts career I have achieved many things such as, but not limited to and in no particular order;