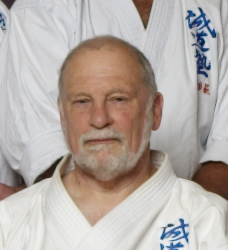 Inducted into the A.M.A.H.O.F.(Inc) for 2012
Lifetime Achievement – Seido Karate

Inducted into the W.K.U.H.O.F. for 2012
Lifetime Achievement – Seido Karate

Renzie has over 50 years experience as a martial artist and is a black belt in judo and an 8th degree black belt in Seido Karate, one of three senior instructors in the world in that art.

He then went on to study karate, represent New Zealand, was a finalist in the New Zealand Open and lived and trained in Japan under the world-renowned karate master Mas Oyama. While there he was offered a contract to fight professionally and was a model in the book ‘Advanced Karate’. Renzie has also trained in New York on numerous occasions under his teacher, Kaicho Tadashi Nakamura, the founder of Seido Karate. He has also appeared in demonstrations at Madison Square Garden and in the movie ‘Strongest Karate’.

He has instructed literally thousands of people, has trained several world champions in Seido Karate and has taught in numerous countries.

In 1990 he was part of a team invited to Tokyo to represent New York, to give demonstrations at the Meiji shrine and help in conducting seminars and appeared on prime time television.

He is a director of Gazing Performance Systems, an international company that specialises in improving performance under pressure. The company trains people in over 60 countries and clients include major multi-national blue chip companies, government departments and leading sporting organisations. The company trains in the areas of sport, business and education. Renzie is co-developer of many of the materials used by the company. He is also responsible for the graphics and design input.

He has worked with a large number of sports people, both in New Zealand and overseas including the English Rugby Union’s High Performance Department, co-conducting seminars and workshops for coaches, players and referees.

Renzie has worked with a number of world and Olympic champion athletes in a variety of sports including triathlon, duathlon, aquathon, swimming, croquet, Seido karate, speed boat racing, multi sport and adventure racing. He also attended the Olympics with the NZ triathlon team.

Renzie has worked with a national champion hockey team, gymnasts, trampolinists, rifle shooter, swimmers and three Coast to Coast winners and has also conducted cross training sessions for the New Zealand rugby team ‘The Crusaders’ and has worked for the Canterbury rugby team and along with Ceri Evans was seconded to work with the All Blacks in 2010/2011. He has also worked with St Bedes rugby.

Currently he is working with the Dutch Triathlon team.

Along with another Gazing director, Dr Ceri Evans, Renzie was invited to give a talk on mental conditioning at Oxford University.

Together with Dr Evans he contributed to Mind Games– a book concerned with the mental aspects of performance published in London, 2004.

He presently works as a company director, graphic designer and for some years as a therapist at a local medical clinic.

As a graphic designer he was a judge at the New York Art Directors’ Club’s International Awards. Has had his own design business for many years and has produced a wide range of work from logos, brochures, numerous books and also illustrates.

He has lectured at tertiary level in design and illustration.

As a musician Renzie was a finalist in the Tamworth songwriting awards and has released four albums, mostly of his own work.

His songs have appeared on national radio and in TV and radio ads.

He trained under the Elisabeth Kübler Ross organisation in the USA, Australia and New Zealand as well as having a background and training in other therapeutic modalities.

Is an Avatar master and for the last few years has given a series of long distance lectures to post-graduate students on facilitating change for patients of health professionals.

Renzie’s broad background gives him a unique perspective on the building blocks to success in a variety of domains. His work in the community was recognised recently when the city of Christchurch (New Zealand) presented him with a civic award and in 2008 he was given a ‘heroes’ award by the community.

In 2009 along with fellow kiwi and Gazing director Bede Brosnahan worked in Soweto conducting workshops for teachers in Leadership and Pressure in the Classroom.