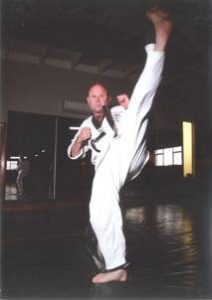 Inducted into the A.M.A.H.O.F.(Inc) for 2012
Instructor of the Year – Taekwondo New Zealand

Inducted into the W.K.U.H.O.F. for 2012
Instructor of the Year – Taekwondo New Zealand

My training has been between Christchurch and Dunedin over the last 35 years depending on work postings.

– TUNZ nationals I coached 21 fighters to 20 Gold Medals and one bronze medal.

– I coached two Christchurch Olympic athletes to the World Champs selection and inclusion.

– Transferred to Timaru and coached the Timaru TKD tournament classes.

This is a brief overview of my Martial Arts background to date. I have been actively involved since 1975 in tournaments and seminars (nationally and internationally) at all levels. I have trained in Australia, Malaysia, Singapore, Indonesia, Thailand and Vietnam.

I have had the privilege to train and coach numerous students to success from regional to international tournaments including World and Asian Champs with excellent results both in experience and medal tallies.

It is fantastic to see students achieve their individual goals. Being a part of this equation is great.