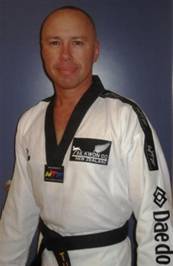 Inducted into the A.M.A.H.O.F.(Inc) for 2012
Instructor of the Year – Taekwondo New Zealand

Inducted into the W.K.U.H.O.F. for 2012
Instructor of the Year – Taekwondo New Zealand

My first experience in the martial arts and Taekwondo was training in the ITF style of Taekwondo at the age of 10 under Master Norman Ng in Levin in 1975 for one year. I later resumed my training as a teenager in WTF style Taekwondo in 1981 when my family moved to Dunedin.

I have continuously up skilled over the years to ensure I have the knowledge and experience to pass on to students and fellow peers. I have been a successful instructor in both the traditional and sport aspects of Taekwondo. I have had the opportunity to be part of student children and teenagers growing into fine respectful adults, who through regular tuition have contributed to society in a positive way.

Since 1983, I have organised local, regional, national and international tournaments and seminars throughout New Zealand and included other organisations and styles. I will continue to be part of the development of Taekwondo in New Zealand and will ensure people experience the true spirit and benefits of Taekwondo and the Martial Arts.

Note: The Kukkiwon is the international body for issuing WTF style Black Belt certificates. The Kukkiwon Certificate Number is permanently allocated to the recipient from their First Dan grading through to their current Dan grade and does not change.

Elected PRESIDENT of the Taekwondo Union of New Zealand 2004 – 2010

Recipient of a ‘Century of Achievement in New Zealand Martial Arts Award’ in 2000 by Fight Times magazine along with 19 other New Zealand recipients.

2006, presented with a special ‘Kukkiwon Diploma’ from the World Kukkiwon Headquarters in South Korea for outstanding services to the development of Taekwondo culture in New Zealand.

2007, the World Taekwondo Federation awarded a Citation for outstanding contribution to WTF Taekwondo.

2008, awarded a second special ‘Kukkiwon Diploma’ from the World Kukkiwon Headquarters during the Oceania Championships for outstanding services in the Oceania region to the development of Taekwondo.

2009, inducted into the New Zealand Martial Arts Hall of Fame

2011, presented with a second Citation from the World Taekwondo Federation     in Seoul Korea by the WTF Secretary General for ongoing services to the development of WTF & Olympic Taekwondo.

Organised the ‘first’ unified WTF style New Zealand National Team in 12 years to compete at the World Taekwondo Championships in Spain 2005. Was actively    involved in all aspects from arranging the selection tournament, selecting the national team, organising travel and management for the team to Spain and    liaised with three New Zealand WTF style organisations to achieve this for the country.

Selected to attend and perform duties as ‘Head of New Zealand Team’ for the Taekwondo World Championships held in Spain 2005.

Appointed by the NZOC to attend the 17th WTF General Assembly in Spain during the World Championships and became the first New Zealander to attend this meeting as a delegate.

Appointed by the NZOC to attend as a founding executive member of the World Taekwondo Federation’s Oceania Taekwondo Union in Sydney Australia and becoming the first New Zealander to become a WTF Oceania Regional delegate.