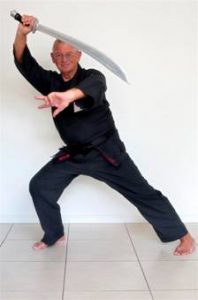 Inducted into the A.M.A.H.O.F.(Inc) for 2012
Instructor of the Year – Kempo Australia

Inducted into the W.K.U.H.O.F. for 2012
Instructor of the Year – Kempo Australia

Became the first professional swimming teacher/coach in the Wellington area 1956. Taught and coached swimming for the next 30 years [till 1986]. Joined Kempo Bushido Ryu 1976.  Full time Chief Instructor 1984 – 1985. Moved to Queensland 1987 and opened the first Dojo in February of that year under Kempo Bushido Ryu. Graded to 6th Degree Black Belt, Shihan and Sifu (Tai chi) by GM Robert Gemmell.

Attended and Instructed at many NZ Seminars conducted by GM Robert Gemmell. Founded the independent School, Kempo ‘Australia’ Karate @ Gung Fu School in 1999. Have taught Kempo and Tai Chi up to the present.

Since the school opened in Australia I have taken 37 students through to 1st Degree Black Belt with many following on with their training. I now have students qualified as 4th, 5th, and 6th Degree Black Belts. Many of whom have also qualified at instructor levels from ‘Qualified instructor’ through  ‘Shihan’. Five levels in all.

Whilst a member of K.B.R. I was also successful in winning Forms, Tile Breaking and 2 man weapon set competitions.

Competitive swimming career from 1948 to March 1956 and included 35 Wellington Centre Titles, 5 national Junior titles and 5 national Senior titles. After all these years I have lost many of the certificates relating to my swimming days and have only medals left.

Kempo at ‘Kempo Bushido Ryu’ Honbu in Porirua NZ from 1976 to 1986 (until moving to Australia) returning to NZ for Training and Instructor Seminars on a regular basis up to 3 times a year. These trips continued until 1999 when I left KBR to form my present School.

Over the last 12 years I have conducted 40 Seminar / Workshops incorporating Hard, Soft and Internal aspects of our school, plus weaponry ie: nunchaku, sai, long staff, short staff, broad sword and tonfa. The duration of the sessions has consisted of 4 hour workshops to 3 day training camps.

As of 2012 my involvement with the art of Kempo has been 36years.

15 years voluntary cleaning of the Wavell Heights Community Hall, one of our training venues. Administered by the local community which relies on rents and donations to keep it running.