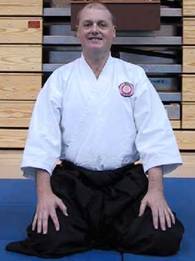 Inducted into the A.M.A.H.O.F.(Inc) for 2012
Lifetime Achievement – Aikido NZ

Inducted into the W.K.U.H.O.F. for 2012
Lifetime Achievement – Aikido NZ

Henry Lynch (5th Dan) started his Aikido journey over 38 years ago and has been helping people learn Aikido for over 24 years. He has also studied judo, kendo and Shrinjo-kempo.

Sensei Henry is a past Foreign Correspondent for the USA based Aikido Today Magazine and was an executive member of the Aikido Association of NZ.

He regularly conducts seminars and workshops where he focuses on the “communication system” between uke and nage. His workshops are known for the visual tools he employs to explain the concepts of aikido, e.g. Sensei Henry’s famous bunny ears to demonstrate the use of “where the head goes the body must follow” as an explicit visual example of Aikido’s basic self defense technique of Ikkyo.

Sensei Henry is the Chief Instructor at the Riai Aikido Learning Centre in Auckland City in New Zealand.