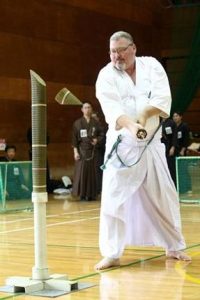 Inducted into the A.M.A.H.O.F.(Inc) for 2012
Instructor of the Year – Zen Goshu Goshin Jutsu

Gordon “Jock” Armstrong began training in Goju Ryu karate do in 1981, under the tutelage of Bryson Keenan [at that time a Sandan] Sensei. The dojo was the gym of the 1st battalion, the Royal Australian Regiment at Lavarack Barracks in Townsville. This was the beginning of a relationship

In 1985 Jock underwent his Nidan [2nd degree black belt] test and in 1986 became the instructor at the Lavarack Barracks Dojo [Mr Keenan Sensei being away due to employment and family commitments].

He met Mr Glen Gardiner, also a soldier at Lavarack, who introduced him to stick fighting in the form of Doce Pares Arnis/Escrima. Training with Mr Gardiner [and his brother, Martin, the senior exponent in Australia who brought Monung Cacoy Canete to Townsville on a seminar] whetted his appetite for weapons of all sorts, Okinawan kobudo and Japanese fencing being his previous exposure to martial art weaponry.

In 1987 he left the army but stayed on in Townsville, teaching and training under Keenan Sensei. It was at this time he became involved in security, especially in door-work and crowd control. He also trained quietly in iai.

In 1988 for family reasons he moved to Melbourne, Victoria and actively trained with a number of highly talented people. Alan Murdoch and Bob Shearwood of Shukokai Karate Do, Tino Ceberano and Richard Bustillo in Escrima at Tino’s dojo. Sal Ebanez in Goju kai. Les Anyos in Shinbukai [Anyos Sensei had been Mr Keenan’s instructor and mentor], Vince Palumbo in Adelaide, who along with Anthony Kleeman, encouraged Jock’s Arnis training and others too many to mention.

At this time he also was reunited with an old army and karate friend from the “Ronin Dojo”, Paul Amey, who was living in Melbourne. Together they trained and worked experiencing numerous altercations in the crowded nightclubs of the time. Both worked armed security in the daytime and in hospitality security at night and weekends. This was an experience which defined the direction of their martial studies.

Already in the “Ronin Dojo” at Lavarack, Keenan Sensei’s own experiences and keen analytical sense had modified the traditional Goju somewhat [such as the use of the high guard and boxing type hand combinations]. Glen Gardiner’s tuition in stick and knife had also influenced their approach to fighting techniques greatly. Now the direction of their study was streamlined, fast and above all, combatively practical.

The arrival of Glen Gardiner at ADFA in Canberra gave him the opportunity to train in Doce Pares again and was eagerly picked up. In 1989 he received his black belt.

In Melbourne internationally renowned instructors turned up for seminars. In his time in Victoria, Jock attended seminars by Benny Urquidez, Wally Jay and Inoue Soke of Hontai Yoshin Ryu Bujutsu. He also trained in jujutsu with Kevin McMenamin Sensei. No ranks were given but Mr McMenamin’s jujutsu instruction was influential, taking Jock into an area he had so far neglected.

In 1991 Jock returned to Townsville and resumed training and teaching. The word ‘karate’ was replaced by ‘goshin’ since over the years the changes in techniques had been radical enough so as to make the system almost unrecognisable as traditional karate-do. Jock founded his own group, the Zen Goshu Budo Kenshukai [by this time having attained the rank of 5th Dan [1994 in Goju ryu Keenan karate] or The All Australian Martial Way Research Group. After attending university and graduating with a BA in Japanese language in 1999, Jock went to Japan and lived and worked there till 2004, teaching English in elementary and junior high schools. He also studied naginata [not for nearly long enough!] and was lucky enough to find a dojo teaching IBF Nakamura ryu [swordsmanship]. Ishikawa Tsutomu Sensei who had trained directly under Nakamura Sensei was extremely hospitable and helpful, as were the other members of the Aoyama dojo in Handa, Aichi prefecture.

Training at the Aoyama Budokan will shine as one of the pivotal points of Jocks martial career. Ishikawa Sensei embarked Jock on a full time training course that resulted in his being given permission to teach and later, being awarded the rank of Nidan. [In November 2007 he received his Sandan {third degree} in Japan.

On his return to Australia in 2004 Jock re-established the “Ronin” dojo and since that time the system has spread from Townsville to dojo’s in Cairns, Melbourne, Sydney, Brisbane and Jakarta, Bali and Singapore.  At present, Jock is kaicho [founder and chief instructor] of ZGBK teaching Goshin Jutsu [unarmed combat], Nakamura Ryu Batto Do, 5th degree black belt; and Cacoy Doce Pares Arnis, 1st degree black belt.

Jock was also involved indirectly with the MUC [Military Unarmed Combat] program through Major Mark Lewis and Captain Glen Gardiner when approached by both officers to assist in an advisory role as required from the mid 1990’s on. From 1991 till 1999 Jock Armstrong served in 31 RQR [Royal Queensland Regiment].

MUC had been run by Major John Whipp, a highly experienced judo practitioner and coach as well as being involved with MUC from 1962 when certified as an MUC instructor by then WO2 Ken “Blue” Curran.

The emphasis was on effective, simple, often lethal techniques- exactly what a soldier in battle needs. When Major Whipp retired from service, MUC training almost folded and at best became splintered with individual instructors still maintaining skills at unit level or as Brigade MUC Liaison Officers as was the case with Captain Gardiner until his eventual retirement from military service.  Eventually MUC was replaced by MSD [Military Self Defence]. The emphasis became more peacekeeping/ security oriented.

Stemming from this, Jock was approached to conduct unarmed combat/close quarter battle training by Major Damien Green, the 6th battalion, Royal Australian Regiment in 2007. This was further supported by recommendations from now retired Major John Whipp.  The training was a great success and led to the development of an infantry specific course [mirroring the old MUC concept] for the battalion. This led to the inclusion of the course in the battalion’s pre-deployment training for Afghanistan in 2010.

In 2011 Jock to the Australian team for Nakamura Ryu Batto-do to Japan where the team took the bronze medal in the team cutting division in Yokohama at the annual Taikai [gathering/competition].

1985- Received 2nd dan grade [double graded as hadn’t had time to do 1st dan due to military commitments.

1988/1991- Went to Melbourne. Trained with Alan Murdoch and Bob Shearwood of Shukokai Dandenong. Attended various seminars including that of Benny Urquidez.

1999- Graduated with BA in Japanese language and culture. Gained position as ALT in Japan with Nova.

1999/2004- lived and worked in various schools; Nova till 2001. Contracted by Altia Central to teach in state junior high and elementary. 2003 met Ishikawa Tsutomu sensei of IBF Nakamura ryu batto do.

2007/2010- Developed and taught MUC/CQB course to 6 RAR. Conducted a series of Goshinjutsu and Batto Do seminars in Jakarta Indonesia.